I saw Dreamgirls on the 12th April 2017 at the Savoy Theatre. I literally got the last ticket going in Row H dead centre for half price on the train on the way into London so was really impressed. I had been waiting to see it for ages and seeing as Amber Riley had won Best Actress in a Musical Olivier Award literally 3 days prior I didn’t expect to get tickets.

The vocals were just stunning and there were so many goosebump moments throughout the show! Amber Riley (Effie) was fantastic. Her vocal range and ability was immense. The growls and riffs and vocal power was amazing and literally brought the roof down. Her acting was also good, although personally I don’t really like the character she played her really well and it felt like she was Effie not just Amber from Glee. ‘I’m Not Going’ and ‘I’m Changing’ were real show stopper moments.

However, I was instantly drawn to Liisi Lafontaine (Deena). She stood out because of her acting. She was always totally in character and the emotions she displayed were really true and honest. I felt more for her throughout the show than for the main character as it felt like Deena actually struggled more than Effie did. Her voice was amazing too and I loved the soft quality to it, something that Amber didn’t really show. The duet between Amber and Liisi in Act II ‘Listen’ was just amazing and I felt their vocals really matched each others. 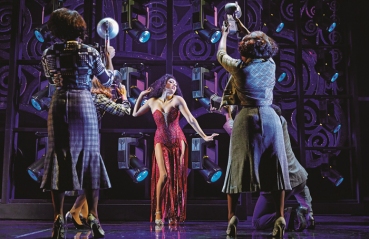 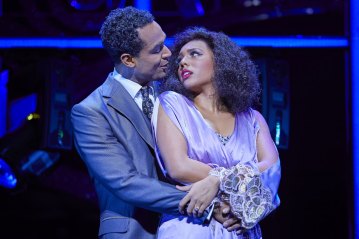 Asmeret Ghebremichael (Lorrell) was a very comic addition. Her face was always lit up and she played the other half to Jimmy really well. Again she had a great voice, especially in ‘Ain’t No Party’ where she also had the audience in laughter.

Unfortunately Joe Aaron Reid was not on but I saw his understudy Rohan Richards (Curtis) who was just fantastic. Brilliant acting, dancing and singing at all times. I loved the song ‘Steppin’ to the Bad Side’ where the harmonies and choreography were just awesome. Tyrone Huntley (C.C) was really super too, although I did wish he had more songs as his voice is divine.

Adam J. Bernard (Jimmy) had also won an Olivier Award 3 days prior and was in full command of the stage and audience. I really enjoyed his performances and he was really funny and larger than life without being over-bearing or unbelievable as a character. I think it would have been good to see more of his struggles during the show too as I did find it glossed over some of the issues but I guess it had to cut some elements out to make sure it lasted less than 2 hours 30 mins. 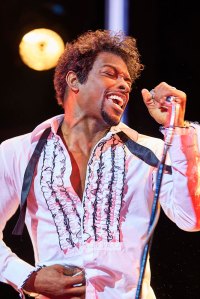 The choreography was fairly simple but effective and it felt true to the era. The costumes were to die for! So much sparkle and glamour! Plus I felt that the ‘normal’ clothes were very well thought about and fitted the correct time period and fashions for young Americans. The quick costume changes were very swift with no major errors.

I was really impressed with the set. The set was very simplistic with revolving lights which meant that you could see both on stage and back stage depending on which way they were turned. This was a really clever idea rather than having the performers coming on and off stage each time. The extra props and moving set pieces were all used effectively and were good quality which added to the high end factor of a West End show.

The ensemble were all very talented but I felt they were not that prominent in the show. As always without them the show would be more of a concert but they were mainly in the background and it was quite hard to actually see who was on stage. Saying that they all did a great job and I did enjoy the busy feel on stage with the ensemble taking various roles and often just walking on and off stage to add to the effect of being backstage.

Having been a fan of the film the music was quite different. I enjoyed the harmonies, especially the guys. Some of the main songs were the same but with slightly different arrangements. I really enjoyed all of the songs and felt that each song was relevant and fitting to the musical.

Overall I am really glad to have seen Dreamgirls and to have seen Amber in it too (especially as she is often off) was great. The vocals were amazing and I enjoyed the classy, showbiz feel of it. I would definitely recommend the show!