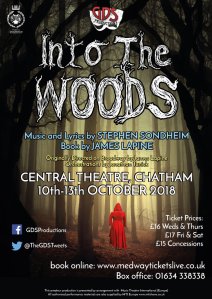 Into The Woods: Central Theatre, Chatham.

Stephen Sondheim’s famous Into The Woods is the latest musical performed by the Gillingham Dramatic Society (GDS) who are one of Kent’s premier amateur theatre companies, specialising in musical theatre and pantomime. They have been performing shows in the Medway area for over forty years and this is their most recent production to hit audiences.

Into The Woods combines well-known characters such as Red Riding Hood, Cinderella, Rapunzel with other fairytale characters such as the Witch, Prince and Jack and the Beanstalk into a story of their own. Recently revived as a hit film in 2015, Into The Woods is a challenging piece of theatre with a complicated score, tricky tongue twisters and an abundance of characters and plot lines interwoven together. The Gillingham Dramatic Society does a splendid job putting on this well-loved musical.

The set design and construction by Gerald Flanagan, Larry Davis, Kasimierz Sterecki and John Endicott is brilliant. Every effort has been made to make the stage feel like a deep, foreboding woods. The use of the side balcony in the venue added to the effect and instantly the audience are transported to the eery setting. One of the highlights of this show is the lighting. The use of the different coloured beams and filters to add effect are fantastic. They really heighten the tension and help the audience to understand the action taking place on the stage. Direction, by Francene Harris, makes good use of the stage and uses the opportunities within the songs to build the characters relationships and storylines. This musical can seem busy at times due to the sheer amount of plots and characters but this production, due to the clever narration by Chas Alder and the direction, is easy to follow and enjoy.

The cast fully commit to their characters, none more so than Jake Pearse as Cinderella’s Prince and Adam Waters as Rapunzel’s Prince. These two actors have brilliant stage presence and are huge crowd pleasers. Jake Pearse has certainly learnt how to toss his hair in the most Prince-ly fashion. Carly Caller’s strong soprano voice is well-suited to the character of Cinderella whilst Tonia Plowman’s characterisation of the Baker’s Wife is realistic and believable. Scott Highway’s clever awkward, blundering Baker makes for an unlikely hero and works well against the more powerful, strong female characters in the show such as Red Riding Hood and Cinderella. Debbie Brennan has perfected the witch’s cackle and her speed and diction during the opening number is great. Despite a few technical issues, the cast remain professional and in character throughout. 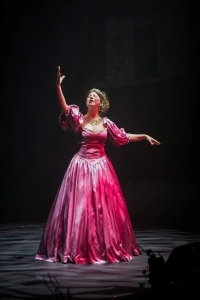 Into The Woods is a very complex musical and the Gillingham Dramatic Society take it on with gusto resulting in a fun night out. It is great to see such talent and passion being performed onstage.  It is also superb to hear a live band, directed by Peter Bailey. If you’re looking for something fresh, fun and well-performed then you won’t go far wrong with a visit to see Into The Woods playing at the Central Theatre, Chatham until the 13th October 2018. For information or tickets click here.

To find out more about the Gillingham Dramatic Society click here.