I saw Rent at St James Theatre, London on Saturday 28th December 2016 and in Churchill Theatre, Bromley on the 11th February 2017. I will be seeing it on 23rd May and closing night of 27th May at Tunbridge Wells.

I have always wanted to see Rent so when I saw it advertised back in the summer of 2016 I quickly booked my tickets. I am SO pleased that I did! I have fallen head over heels completely in love with the musical. Every aspect of the show was absolutely fantastic and I am so pleased to have seen such a great cast and direction for the 20th Anniversary Tour.

The set is very simple but effective and I love how there are so many layers to it. The scaffolding and graffiti helps to set the scene and I liked how the stage itself didn’t change. The props too are very well used and simple which added to the down beaten feel of the production and show. The fact that even the prop guys were dressed like members of the ensemble also helped. The moving tables during ‘La Vie Boheme‘ were used really effectively and I loved how they set the hospital scene. Again simple but very effective.

The choreography by Lee Proud was really good. ‘La Vie Boheme’ was especially good. Its fast paced dance moves and handography is really effective and made everyone get into the mood of the underdog finally winning at life. I loved ‘Out Tonight‘ too and the use of the stairs and scaffolding to show Mimi’s sexy, sassy yet vulnerable character. I didn’t fully understand ‘Contact‘ when I first saw the show but have grown to love it. Again the dancers were really showing off their skills and everyone was fully committed and in time with each other.

But for me what makes this take on Rent so fantastic is the cast. They, by far, make the show! It is a rollercoaster of emotion which is also due to the director (Bruce Guthrie) who has stripped the show back to its core and started from scratch. Every member of the audience was left tear stained and emotionally drained and I think this is a sign of a truly great show.

Billy Cullum (Mark Cohen) has a good stage presence and narrates the story really well. His character can be a tad annoying in some versions I have heard but Billy plays the character effortlessly and is really believable and relatable. His voice was great especially on ‘Rent‘ and in ‘La Vie Boheme‘.

Ryan O’Gorman has such an amazing voice. So low and smooth. His version of ‘I’ll cover you‘ was so emotional. He plays Tom Collins and the journey he goes from from meeting Angel, losing Angel and learning to live again is so believable. He plays the love scenes with Angel really well and you wouldn’t know that he is actually straight. I found too that because he is quite big and butch it really worked with Angel’s feminine side. His subtle facial expressions were effortless and made him a really likeable character too.

Ross Hunter, who plays Roger Davis, has a very rocky edge to his voice which to be honest I didn’t enjoy during my first viewing. However it did grow on my during the second show and his acting is very effective, especially during the finale with Mimi. Roger is quite an annoying character as you just want to shake him and make him stop being mean to Mimi but Ross plays this well and you can see the torment and anger coming from him and the uncertainty about what to do for the best. His relationship onstage with Billy was really good and I loved their duets together in ‘Rent‘ and ‘Goodbye Love‘. He seems to really react well to other characters acting and this made the character come alive.

On my first show I saw Layton Williams playing Angel and on the second I saw Harrison Clark (Layton’s real life boyfriend) as the understudy whilst Leyton rested after an operation. I enjoyed seeing them both take on the role and both of them played the character incredibly sassy and heartbreakingly vulnerable at the same time. Both played the character really well with the dance moves in ‘Tonight 4 u’ being amazing. Such high kicks. Angel is obviously quite a dramatic character and both men played this character really well but also in a realistic way. You could imagine Angel being a real member of the gang. The death scenes were really tastefully done and I loved it when Tom was caring for Angel. Not a dry eye on the house.

The whole ensemble were really committed and you could see they were loving the show. Wherever you looked each member of the cast were always on point and never out of character. I loved the quick character changes and having such a small cast meant that every actor played a vital role. Jenny O’Leary and Joshua Dever really stood out for their amazing vocals and comic timing. Not to mention Javar La’Trail Parker who plays Benny.

Lucie Jones as Maureen Johnson was really funny. Her comic timing was really switched on and her version of ‘Over the Moon’ (a song I don’t really like) had all of the audience moo-ing with her. She really held her own in ‘Take me or Leave me‘ too along with Shanay Holmes, who played  Joanne Jefferson. Both women played their parts very effectively and had awesome vocals throughout. Again they were always in character and I loved the arguments and relationship between the both. ‘Tango Maureen‘ with Shanay and Billy was a feast for the eyes and ears. 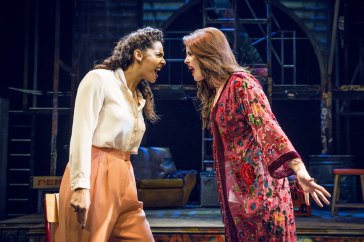 For me, however, there was only one true star of the show. Philippa Stefani! I have seen her in lots of shows over the past 10 years, usually as the ensemble so was really pleased she finally had a title role. Mimi Marquez is a complex character and Philippa showed her to be the true sexy, sassy and yet vulnerable woman she is. I loved how Philippa committed absolutely everything to the role from shaking, twitching and trembling like she was on drugs (seriously she looked like she was an addict in real life) to the subtle facial expressions when her and Roger finally get together. Her facial expressions were so real that it felt like she really was going on Mimi’s journey with Roger. Watching her journey through the story is just amazing and she never lost focus at all. During the second act, Mimi falls into addition, depression and despair and Philippa played this just perfectly. I loved the fact that she didn’t necessarily look ‘pretty’ or sound pitch-perfect for every song. Instead she allowed herself to feel the character and let her emotion shine through. She was crying almost throughout and was so emotional on both shows that she barely bowed at the end and looked absolutely exhausted mentally and physically. Her renditions of ‘Out Tonight‘ and ‘Goodbye Love‘ were so heartfelt and I loved ‘Without You‘. Not only this but she is beautiful, has an amazing voice and is a fabulous dancer and was so 100% believable as the character that I couldn’t take my eyes of her throughout the show whenever she was on stage. 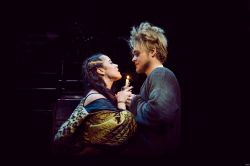 I have become slightly obsessed with the show since seeing it and have listened to the soundtracks almost constantly. Every time I hear it I find something else about it that I had missed from the subtle ‘I should tell you’ melody being repeated whenever Mimi is onstage to the subtle harmonies and key changes. I absolutely love how many different things you can read into it, following the different characters story lines and listening to the complex score. I only wish that it would go back to the West End so more people could enjoy it (myself included). I cannot wait to see the final few performances but at the same time am dreading it. Haven’t found a musical that made me ‘feel’ like this for a long time. A massive thank you to the cast and everyone involved in this amazing production!