I saw Matilda at the Cambridge Theatre on the 16th February 2017. I had been waiting for a long time to see the musical so when I was offered tickets I leapt at the chance.

We saw Zaris-Angel Hator as Matilda. She was so good! I am not sure how old she is but I couldn’t help comparing her to the children I teach. The fact that she remembered all of her lines, songs, dance moves and pulled off very realistic facial expressions was amazing. Very good acting and definitely one to watch for the future!

I didn’t actually know that much about the story line of Matilda so really enjoyed watching it pan out. I thought Michael Begley as Mr Wormwood was really good and he commanded the stage. Craige Els was fantastic at Miss Trunchbull. He really stuck to the character and stayed in character the whole time. 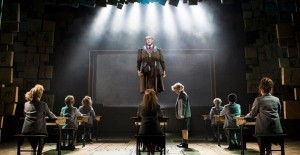 The songs were catchy and energetic. I particularly loved the School Song as I thought that the set and choreography for that song in particular were really clever. ‘When I Grow Up’ which is often seen on TV and variety shows with the rope swings was really effective and I enjoyed how the children and adults were together seamlessly. 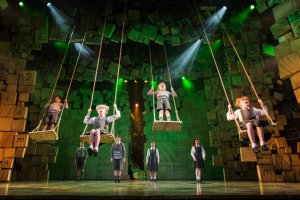 The entire cast were energetic and on character throughout. I was slightly worried about having so many children actors but I needn’t have worried as they were really professional and not too ‘stage school’. I certainly went out humming ‘Revolting Children’.

Some of the stand out children were Olivia Calladine-Smith (Lavender), Hannah Bouhamdi (Hortensia) and Max Brophy (Bruce). We saw the understudy (Biancha Szynal) for Miss Honey and she played the character really well. Very believable with a lovely voice.

I thought the set was really clever and given that the stage isn’t the biggest in London it was used very effectively. I loved the alphabet blocks around the outside of the stage. Kept spotting different words spelt out which I am sure if meant to keep the many children audience members quiet but actually kept me quite amused too. The school tables coming up from the floor was very effective and I really liked the school gates during the ‘School Song‘. The props worked well and the set changes were really smooth and quick.

The choreography was really good. I enjoyed how the children and adults were both used. I thought the gym lesson was really enjoyable and all of the school scenes were really energetic. All of the cast were really on time and full of beans. They were well synced and clearly had good dance training.

The whole theatre was kitted out in Matilda stuff and I couldn’t help but love the Children are Maggots and other such signs and merchandise. I think as a teacher I am mid-way between Miss Trunchbull and Miss Honey (well maybe slightly more like Miss Trunchbull).

I really enjoyed seeing the show and certainly went away humming the songs. I don’t think I would see it again but it kept me amused throughout and I am pleased I got to see it.