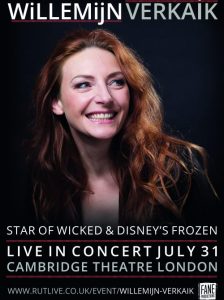 I was lucky enough to get tickets for Willemijn Verkaik‘s one-off concert, just a week after she finished in Wicked, on the 31st July 2017. It was held at the Cambridge Theatre in London and she had several special guests alongside her as well as an 8-piece band.

The theatre itself had done a great job of lighting and atmosphere for this one-off concert and it was lovely to be in a theatre for a concert rather than squashed into another venue.

Willemijn sang a range of different songs, genres and some of her own original material too. I loved ‘Nothing Stops Another Day‘ from Ghost which she sang at the start of the show. Her range from vulnerable to full out belt was so impressive and she captured the essence of the song. She also amazed me by singing in 3 different languages in one song – that’s got to take practise right?!

Celinde Schoenmaker joined her for ‘I Dreamed a Dream‘ and once again both voices were so powerful and yet showed the true emotion of the piece. Their harmonies together were also really impressive. They also changed language half way through the song to German – although I don’t speak German it didn’t detract from the song or emotion at all. 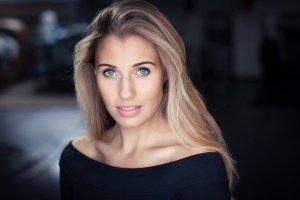 Willemijn then did a George Michael medley which was really fun. Something different to the first ‘showy’ numbers and really got the audience going.

For me, one of the best moments of the night was when Suzie Mathers and Savannah Stevenson joined Willemijn to sing an acapella Wicked mash-up. The harmonies and different take on the various songs by both Elphaba and Glinda were unbelievable! I loved how they showed off their voices and linked in different songs and elements into one piece. The audience were just silent throughout. It was amazing to watch and listen to and really showed how talented all three leading ladies are vocally.

The only guy performing was Tyrone Huntley and as usual his voice was so impressive, rich and varied. He has such a clear tone and is so expressive when he sings, no matter the song. I could listen to him for ages.

There was a children’s choir/stage school called Stage Box who performed a Frozen and Sondheim medley. They were really impressive. Some clearly talented future stars in the making. It was a shame because the mics and sound kept cutting, especially on the soloists but the overall performances from vocals to choreography was really remarkable for a group of young performers.

Willemijn sang another Sondheim song ‘Another 100 people‘ which I’d never heard. It was very wordy and quick but the story-telling was so clear and her diction was excellent that I quickly got sucked into the song.

Her own original songs were fabulous. I especially liked the song which she said she had written after going to a children’s hospital and seeing their faces light up when Elphaba and Glinda entered the room. All of the songs she performed, no matter the genre, style or artist, were performed from the heart and with such conviction. You can completely see why she has had such a good career on stage!

Finally she performed a Wicked medley to end of ‘Defying Gravity‘ and ‘No Good Deed‘. The belts and riffs were amazing! Complete power-horse vocals. I really felt like I had seen it all but some of the notes and power behind them in those final songs were incredible! I cannot wait to see what Willemijn does next but whatever it is I’m sure it will be stunning. 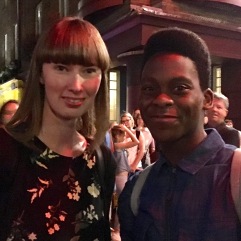