This show was a feast for the eyes! The projections were some of the best I have ever seen. In some shows they can seem to detract from the action on stage but in this case they completely added to it and made the stage come alive. You could really imagine being in Paris and this was mainly due to the fantastic use of the projections and scenery. The use of small props, flats and scenery was added to by the dancers who not only brought the props onstage but also danced their way around stage. Not a second was wasted on the stage. Everything was choreographed to within an inch of its life. 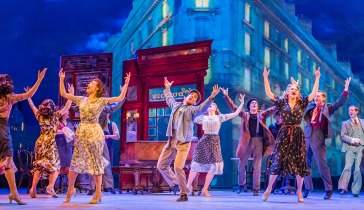 Again the lighting was really effective. I was in Row T and as this is such a huge theatre this felt quite far back but the lighting really helped not only to see the actors and dancers on stage but also to tell the story and emotion.

This show is not your average musical theatre production – it is a lot more dance based than most, with limited songs and no big ensemble numbers. However the dancing is exquisite and the talent on stage is outstanding! I am not personally a big ballet fan, especially not traditional ballet, and did find some of the dance pieces quite lengthy however the score was lovely and the storytelling was impressive.

I enjoyed this show more than a classic ballet due to the acted scenes and comic value. The three main characters Ashley Day (Jerry), Haydn Oakley (Henri) and David Seadon-Young (Adam) were fantastic at telling the story. I loved the comic bits between the three men on stage and their stage presence was great. All three men had great singing voices too and with numbers such as ‘I got Rhythm‘, ‘They Can’t Take That Away from Me’ and ‘Fidgety Feet‘ there are some huge hits to get you humming a long to.

For me David Seadon-Young really stood out. His characterisation was fantastic, hilarious at points and engaging. I enjoyed how the character narrated the story. The character was strong and capable, despite his physicality. I was secretly hoping for the underdog to win in this case as I am sure most of the audience were. David has just appeared as Judd in Oklahoma for the BBC Proms and again in this his acting was completely captivating and dramatic in just the right way.

The story, whilst quite predictable, moved a long at a good pace and came to a good conclusion. It was definitely a show that you do not need to concentrate too much on, which is perfect for many theatre goers who want to be stunned by fantastic sets and outstanding dancing. Jane Asher also had some hilarious one-liners that really caught the audiences attention.

Leanne Cope (Lise) is an astounding dancer. Classically trained, as are most of the cast, this is her first venture into musical theatre and I felt she made her debut really well. She had a good voice during her vocal numbers and her acting and stage presence was great. She played the character well, showing Lise to be sweet, caring and uncertain about what to do for the best. I am sure we will be seeing more of her in the musical theatre world in the future.

Overall this show is one not to be missed for anyone loving dance, especially ballet, and a clever little story line. For me, the most amazing thing was the set design and projections which were worth the ticket price alone to see.