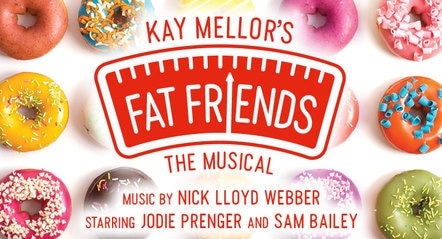 This brand new musical is written by BAFTA award winning writer Kay Mellor OBE, creator of the original hit series, and features original music by Nick Lloyd Webber.
Join the group of  loveable characters as they are put through their Zumba paces at their local branch of Super Slimmers by the lovelorn Lauren whilst Kelly fantasises about fitting in to the wedding dress of her dreams. The show sets out to be packed full of warmth, hope, humour, love and weight loss.
This production features an all-star cast including Jodie Prenger (I’d Do Anything winner, Oliver, Tell Me on a Sunday); Sam Bailey (X Factor); Natasha Hamilton (Atomic Kitten); Natalie Anderson (Wicked, Emmerdale) and Kevin Kennedy (Coronation Street). Freddie Flintoff also makes his stage debut at certain venues. 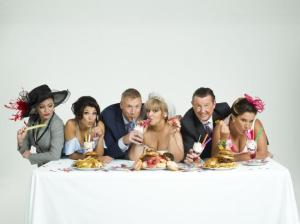 Whilst this production may not break any boundaries or win awards for innovation it is certainly fun, heartwarming and a fantastic night out. The storyline is pacy and the characters are instantly likeable. A lot of people will relate to the struggles of trying to lose weight and the dreaded weekly weigh ins. The message about loving yourself for yourself is prevalent throughout the show especially with the finale number ‘Love Who You Are’. 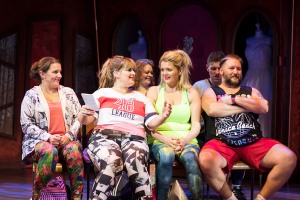 The score by Nick Lloyd Webber was filled with catchy, pop tunes along with the occasional ballad and power house notes. The cast performed each song well whilst remaining in character and using the correct accents. Sam Bailey’s finale vocals raised the roof.
One of the highlights of the show was Natalie Anderson as Lauren. She completely commanded the stage and was in character at all times. ‘Mr. Someone‘ really showed the emotion behind her likeable character. Her singing voice is brilliant and she used the great tone and range effectively in all of her songs. Rachael Wooding also excelled as Kelly’s sister, Joanne. Her comic timing and expressions made for some hilarious moments. In addition Chloe Hart also wowed with her impressive vocals and acting skills. 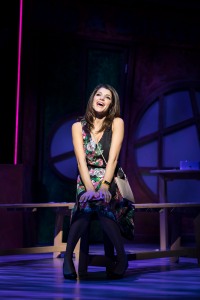 The role of Kevin is shared with Joel Montague and Freddie Flintoff. Joel Montague’s Kevin felt slightly over dramatic to start but he came into his own during the second act. He sung ‘The Only Fool is Me’ fantastically. His tone and the power behind the notes was brilliant and really captured the emotion of the character.
The show is filled with comedy moments and funny innuendoes. It would be perfect for hen nights, girly nights out and of course slimming club social outings. Written by Kay Mellor the book was well thought out and felt similar to the TV show whilst being different enough to make this a show in its own right.
Jodie Prenger as lead character Kelly, certainly has the stage presence and confidence to pull off this brave role. The use of a range of body shapes and sizes was perfect for this show. It was great to see talented performers on stage, not held back due to their size in this competitive, looks driven industry. 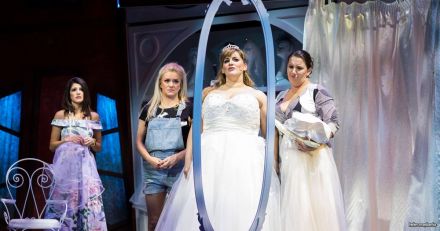 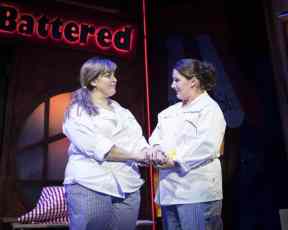 The sets, designed by Bretta Gerecke, did look slightly flimsy at points but served the show well. As a touring production the sets were sufficient and allowed for a lot of room on stage. The minimal set changes also helped with quick transitions. The lighting, by Nick Richings, was also effective and was put to good use to set the scene and highlight small details.
Choreography by Karen Bruce was fairly simplistic and basic. It worked with the show which is not dance heavy. The Bob Fosse style ensemble routine during ‘Step Up’ however was very effective and again added humour to the show.
Overall this new musical was a hit with the audience. Funny, heart warming and well put together it certainly makes for an extremely entertaining night out. It may not be winning prizes for innovation but it definitely makes the audience leave feeling happy and hopefully also leave with the shows message to ‘Love Who You Are’. Perfect for anyone in the middle of the January blues after the Christmas blow out!
Fat Friends is touring the UK until 2nd June 2018. For more information and tickets see http://www.fatfriendsthemusical.com.
Fat Friends is playing at The Churchill Theatre, Bromley until the 20th January 2018. For tickets click here.
Photo Credit: Jay Brooks

One thought on “Fat Friends the Musical: Review”