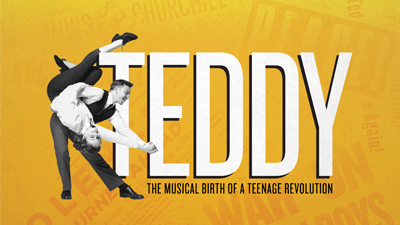 TEDDY tells the story of two young adolescents, Teddy and Josie, who are about to hit the streets of London for a good time. Featuring electrifying original songs influenced by hits from the 1950’s performed by the on-stage live band Johnny Valentine and the Broken Hearts’ this fresh show mixes an original musical with the energy of a live gig. TEDDY is the story of rebellious youth and the birth of a new musical era.

The unique style of story-telling in this show really makes it stand out from the crowd. The tremendously talented Molly Chesworth (Josie) and George Parker (Teddy) narrate the story and confidently take on multiple characters to great effect and do all this effortlessly. Although the initial storyline may appear simple, the resulting product is far from it. With twists and turns the two actors completely engage the audience and suck them in for a night out in the roaring 1950’s. What made this musical-come-gig so unique was the insanely clever script by Tristan Bernays. The script itself was almost poetic in style and extremely pacy. The characters, however big and brash, felt believable and the use of narration throughout the show was a novel approach. 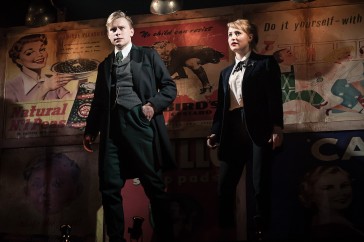 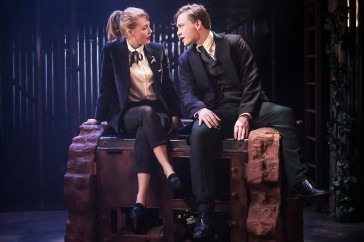 The onstage band Johnny Valentine and the Broken Hearts’ were fantastic and it made a pleasant surprise to see a female playing bass. Andrew Gallo, Freya Parks, Harrison White and Dylan Wood accompanied the show throughout and the original songs written by Dougal Irvine were completely in keeping with the era and were insanely catchy. Not only this, but the incredible band play whilst the audience take their seats and even have a live gig at the end of the show where the audience is invited to join them on the dance floor. 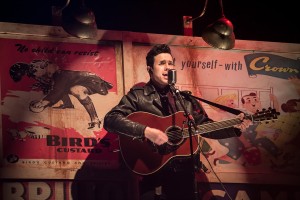 The interesting staging and stylised choreography by Eleanor Rhode and Tom Jackson Greaves was completely fitting the style of show and music. The actors utilised the small stage extremely well and the use of a multi-level stage added further to the show.

Whilst reviewing productions, the venues are often not spoken about but The Vaults and TEDDY set designer, Max Dorey, must be commended for creating a truly immersive setting. From the rubble of the post-war era to the Rock’n’Roll posters in the toilets. This theatre really does go to extreme lengths to make the audience feel part of the show and create a unique atmosphere and experience. 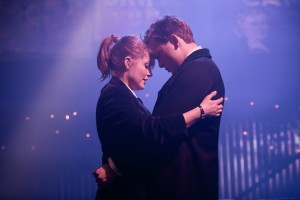 This fun, new show is a must for fans of Rock’n’Roll music but is much more than that. With electric music, an innovative approach to storytelling and outstanding acting this is the must see show of the season!

TEDDY runs at The Vaults until 3rd June 2018. For more information and tickets click here.

This review was originally written for and published by LondonTheatre1.

One thought on “TEDDY – Review”