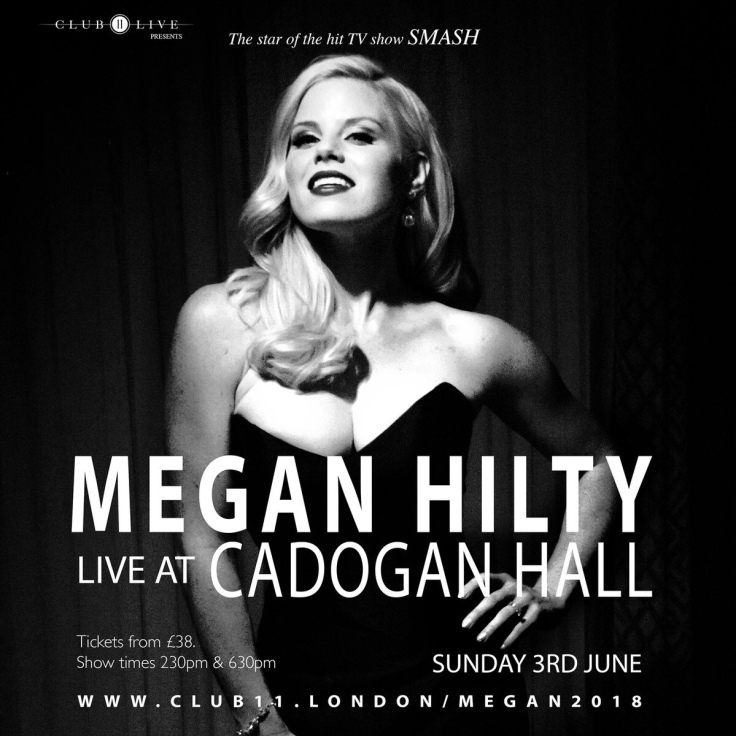 Broadway star of Wicked, 9 to 5 and the NBC hit series ‘Smash‘ Megan Hilty performed two long awaited shows at Cadogan Hall on the 3rd June 2018. The show was a master class of acting through song and incredible vocal talent! With every new song, Megan delivered stand out vocals and a fully embodied each character.

Of course Megan’s set list included lots of songs from the various shows that she has been part of including Wicked where she played Glinda for over 4 years. Of the featured songs ‘Popular‘ was especially brilliant and showed off Megan’s sassiness and comedic talent. In the transitions between songs Megan’s down to earth and humble nature meant that she really connected to the audience. Her apt for comedy was also obvious from the moment she started interacting with the audience.

NBC’s ‘Smash‘ which focused on a new musical ‘Bombshell’ being developed, produced and put onto the Broadway stage is still a big hit with fans with lots of people calling for its return. Megan was one half of the duo featured in this series playing Ivy Lynn – the star who would eventually become Marilyn Monroe herself. Obviously Megan had to do some songs from this show and ‘They Just Keep Moving The Line‘ was performed brilliantly as the opening to the concert. A lesser known song called ‘Second Hand White Baby Grand‘ allowed Megan to show off her emotional side.

Megan’s set list contained mostly songs from musicals including a great rendition of ‘Suddenly Seymour‘ from Little Shop of Horrors with her husband, who also played guitar for this concert. She also included the go-to song for every female artist putting on a concert at the moment – ‘She Used to be Mine‘ from Waitress. During this song Megan showed her vulnerability as well as her the powerful, rich tone of her voice. She also managed to truly make the song her own and emote through the words.

Prior to Broadway, Megan trained classically and is a capable soprano, as hilariously shown in ‘Alto’s Lament‘. She got the chance to shine during her rendition of ‘I Could Have Danced All Night‘ where her belt and vibrato brought out goosebumps.

Megan’s talent was undeniable as she sang, belted and riffed her way through the varied set list. What’s more is that she has a passion for performing and a commitment to each song. Definitely keep an eye out for this outstanding performer when she comes back to London next time.

One thought on “Megan Hilty in Concert – Review”