Leave to Remain is definitely not about Brexit but in fact is a brand new musical by Matt Jones told through music, movement and drama featuring original new songs by Bloc Party’s Kele Okereke. Telling a modern love story it focuses on a young gay couple, Obi and Alex, leading busy lives in London however when Alex’s visa is questioned the couple must consider marriage as an option. This means confronting their families, prejudices and their pasts.

Leave to Remain is quite unlike anything else on the stage currently. Its innovative use of contemporary stylised choreography mixed with a modern, fresh score makes this production spellbinding. The blend of clever lyrics, a modern feel and traditional African sounds creates a brilliant backdrop for this terrific story. Tyrone Huntley excels as we find out about his ‘coming out’ story and the prejudice he has faced from his parents, most notably his father. The emotion visible on Huntley’s face and portrayed through his movements onstage comes through fantastically in his superb vocals. Huntley’s command of stage is brilliant and his commitment and passion for the character shines throughout the 2-hour production. Billy Cullum matches Huntley’s for passion and commitment as the ex-drug addict Alex. His vocals compliment Huntley’s and his choreography is gorgeous, particularly the use of fly system. Sandy Batchelor and Rakie Ayola’s portrayal of Obi’s strict parents are believable and moving, particularly the bond between Mother and Son which is allowed to develop through the show. All of the cast are just simply excellent. Arun Blair-Mangat must also be commended for his rich vocals during the song ‘Damien’s Seduction‘. 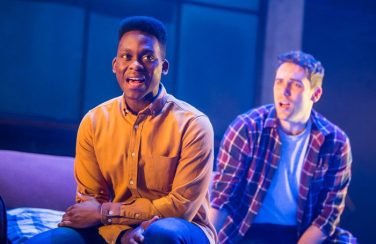 This show thrives on its individual storytelling which the director Robby Graham has managed to blend together so seamlessly. There is never a still moment onstage with every transition being executed to perfection. Rebecca Brower’s set design and use of sliding flats allows for no moment onstage to be wasted and its simplistic nature helps the audience to focus on the story unfolding before them. Lighting, by Anna Watson, further adds to the contemporary feel of this moving production, particularly during the clever choreography.

Tackling hard-hitting topics such as homophobia, gay marriage, drug and alcohol misuse, addiction and prejudice is a tough call but Leave to Remain does so effortlessly. The audience are taken on an emotional rollercoaster as we find out about the history and lives of the two young men in the lead up to their wedding. It is a powerful, moving tale and the unique way of blending movement, action and music together is outstanding. This production is a taste for what is to come with new British musicals – innovative , unique and spellbinding. Keep everything crossed that this is just the beginning for Leave to Remain as it is a story to which so many can relate to and learn from. With this production only running until Saturday 16th February do not miss the chance to see this extraordinary piece of theatre.

Leave to Remain runs at the Lyric Hammersmith until 16th February 2019. For tickets and information click here.