Over 400 years ago Emilia Bassano wanted her voice to be heard. It wasn’t. Now 400 years later it is finally being told. Having been a success at The Globe in 2018 Emilia has transferred to the West End’s Vaudeville Theatre for a limited run until June 2019. Emilia is a fairly unknown quantity. A writer, wife, lover, mother and considered, by many, to be Shakespeare’s muse or ‘Dark Lady’. As a woman who wanted eduction, respect, opportunity and even equality for women, Emilia was way beyond her time and as a result is relatively unknown. Through a story of passion, fury, laughter and song finally Emilia’s voice can be heard as the audience are invited to stand up and be counted with her.

Historical productions are definitely on trend at the moment with shows like Hamilton and Six being extremely popular and being nominated for countless awards. Both shows manage to mix history with contemporary styles to engage a younger audience. Emilia is similar in style. Distinctively classic in some ways, from the dialogue to the elaborate historically accurate costumes. But the addition of modern references, contemporary music and a novel way of telling the story Emilia stands out from the crowd. At points, some of the modern influences do not completely work and make it slightly harder for the audience to fully connect with Emilia; her pain and plight. Trying to mix humour with an emotive story is definitely a good concept but at times its lightheartedness is sometimes at odds with the tough life and strong emotions felt by Emilia.

The story is partially narrated by Emilia 3 whilst we relive her life and many tribulations that shaped her thoughts. This narration works really well and helps the audience to understand the fairly complex life of Emilia Bassano. The production breaks the fourth wall cleverly throughout the show and uses this to its advantages. There also sections where the cast are in amongst the audience and whilst this is fun, it does detract slightly from Emilia’s plight. 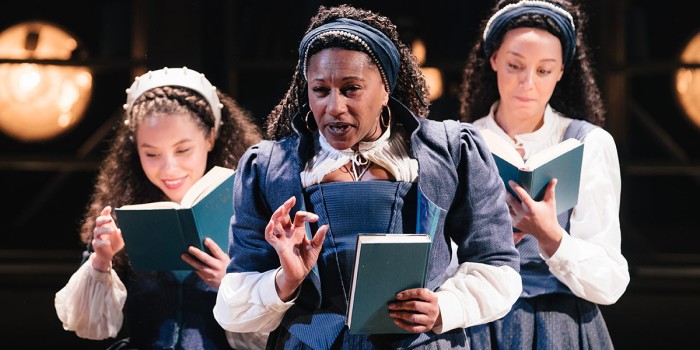 However, despite some sections which feel a bit at odds with each other, Emilia is definitely something new and empowering. The message passionately runs throughout the show from the opening speech and comes to a strong, thought provoking conclusion by the ending. It is certainly a masterclass of monologues with the audience being treated to some powerful, passionate speeches throughout.

What stands this show apart from others is that it is performed by an all-female cast and with an all-female creative team. Opening on International Women’s Day, Emilia is certainly a show which stays true to Emilia Bassano’s convictions and thoughts about equality and feminism. Before her time, in many respects, Emilia makes the audience think about equality, race relations and of course, having the right to a voice. In a society which is so very different to 1500’s when Emilia was alive there are still discrepancies between how females and males are treated and with other issues raising all of the time including immigration, the trans society, gay rights, inclusion and equality Emilia is still relevant and thought provoking. 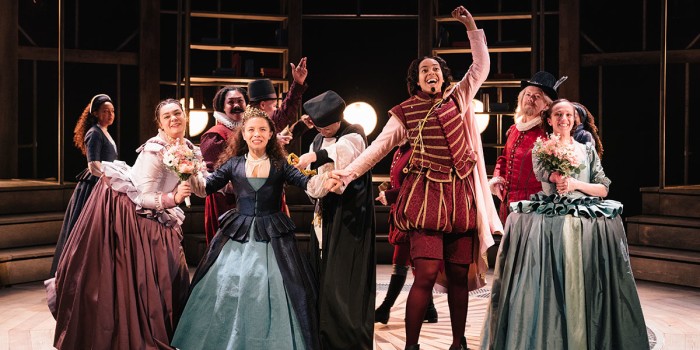 The all-female cast are led by Saffron Coomber, Adelle Leonce and Clare Perkins as the three Emilia’s depicting the outspoken poet at different stages of her life. All three are powerful in their roles and certainly convey Emilia’s strength of mind and commitment. Other notable performers are Charity Wakefield as William Shakespeare, Jackie Clune as Lord Thomas Howard and Sophie Stone as Lady Margaret Clifford. All of the talented cast change roles, and even genders, brilliantly and deliver every line with conviction. In addition to being an all-female cast it is also an all-inclusive cast with colour-blind casting, performers of different shapes and sizes, ages and physical abilities. It is liberating to see so many different women onstage and to see people with ‘disabilities’ in lead roles. This is just what Emilia would have wanted.

The simple set by Joanna Scotcher is reminiscent of Shakespeare’s Globe. It works well to create a focused space on the stage but at times does feel quite large and underused. Large white lights help to ensure all focus is on the cast and plot. The use of on-stage musicians and having the ensemble cast singing contemporary accompaniment is a brilliant touch and adds dynamic and depth to the acting. In fact the use of music could be utilised even more to add even more drama to some scenes. 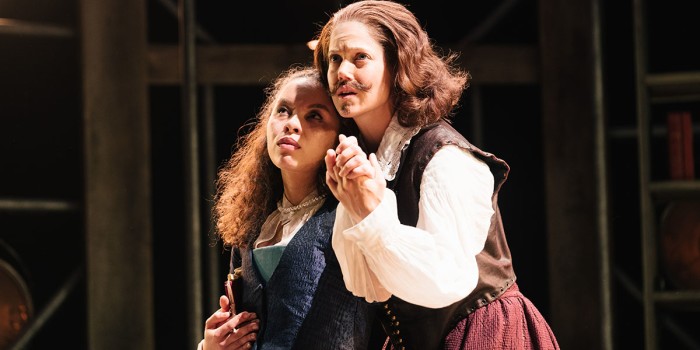 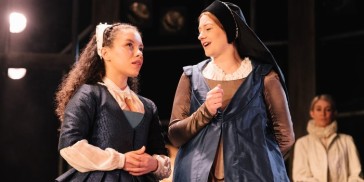 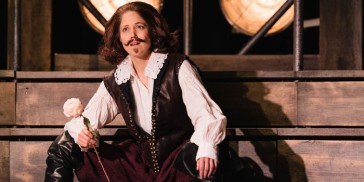 An oddly humorous, yet thought provoking and emotionally driven production, Emilia is certainly able to – just what Emilia herself always wanted – be heard. It is hard to leave the theatre without taking something away from the story and the fact that it is a true account of someone who, along with thousands of others, has been silenced until now makes it even more powerful. Whilst some of the concepts seem at odds with each other, overall this is an inspired play and is definitely a must see for anyone interested in history or female rights.

Emilia runs at the Vaudeville Theatre, London until 15th June 2019. For information and tickets click here.

This review was written for LondonTheatre1.