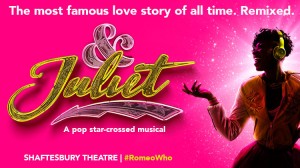 & Juliet quite frankly is a musical extravaganza! Managing to mix Shakespeare’s most well-loved characters with modern pop hits and doing so amazingly. & Juliet focuses on an alternative ending for Romeo and Juliet. What if instead of killing herself Juliet takes her own destiny and rewrites her story? William Shakespeare himself and his, ever suffering, wife Anne Hathaway chop and change Juliet’s as it comes to life on the stage resulting in a show about empowerment, challenging yourself and taking your own destiny and making it happen.

Often with jukebox musicals the songs do not lend themselves to the show and can feel shoehorned in. This is certainly not the case with & Juliet. It feels like the songs and especially the lyrics, by Max Martin and friends, have been written for this show, the characters and their emotions. Clever arrangements of the popular songs add new meaning and help to bring these dated characters to life. & Juliet is fun and feisty. It doesn’t take itself too seriously and whilst it tackles many issues it plays on the fact that it is a jukebox musical and therefore works brilliantly. The popular hits such as ‘Domino’, ‘Everybody’, ‘… Baby One More Time’ and ‘Roar’ are sure to attract audiences and they are used in such a way as to add to the storytelling and characters.

Every detail has been thought about in this new musical. The set, designed by Soutra Gilmour, is exquisitely detailed with modern references and yet still having that Shakespearian feel. The small details such as having references to music in each scene whether through a jukebox, vintage radio or fairground organ is very effective and the textured walls themselves are highly detailed with clever graffiti. It is also brilliant to see a new musical which uses well made set pieces and props rather than relying on the use of digital screens and projections. The clever use of a double revolve makes the stage come alive and the hydraulics add further to the wow impact of the show. In fact, without giving away any spoilers, prepare to be blown away by the extra lengths the creators of & Juliet have gone to. Where else can you see confetti, bubbles and pyrotechnics in one show? At times & Juliet feels more of a pop concert than a musical – and it is outstanding!

The level of detail continues into the gorgeous costumes which are opulent and beautifully constructed. Each character has their own distinctive style and the mix of modern sportswear and historical renaissance style is wonderful. Again, the attention to detail is second to none. Juliet, for example, has embroidered motifs and crests which modernise the crest of the Capulets and Shakespeare’s version of the play. The level of detail is amazing and the costumes work brilliantly with the shows fantastic and vivid lighting by Howard Hudson and the clever choreography helps to show off the garments further.

Audience should prepare for twists, surprises but most of all stunning talent! This high energy cast are committed, passionate and outrageously talented. Miriam-Teak Lee is outstanding as Juliet. Her vocals are superb as she manages to belt her way through some of pop’s biggest hits and then capture the audience during the smaller, tender moments with her subtle emotion and delicate vocals. Cassidy Janson is hilarious as Anne, who stands her ground against her famous playwright husband William Shakespeare. Managing to channel her inner carefree nature she makes a fun and whimsical friend to Juliet and during the song ‘That’s The Way It Is’ she shows raw emotion. Jordan Luke Gage is perfect as the slightly arrogant, unsure, bumbling Romeo – so different from Shakespeare’s depiction of the character. He plays on the comedy element of his character really well and the chemistry between Romeo and Juliet is great – particularly during the song ‘One More Try’. Melanie La Barrie is absolutely hilarious as the Nurse. She arguably has some of the best lines in the show and her speech during the second act demonstrates not just great comic acting but incredible breath control. Arun Blair-Mangat astounds the audience with his superb rendition of ‘I’m Not A Girl, Not Yet A Woman‘ whilst his duet with Tim Mahendran is gorgeous, showing off his rich, deep vocals. Tim Mahendran himself, making his West End debut in & Juliet, is great as Francois, a young boy confused about his sexuality whilst trying to live up to his fathers ideals. He portrays the characters uncertainty and struggles convincingly and the chemistry between Francois and May is heartfelt. 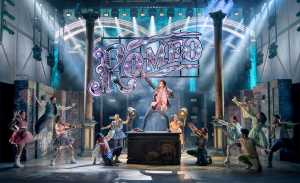 All of the cast are outstanding in their roles. It is clear that each member of the cast has worked hard to create their own character, their own traits and habits. Because this cast have been working together for over 9 months to create this show you can tell they have invested so much time and energy into giving their best performance and having ownership of their characters which results in fantastic characterisation throughout. It is evident that this cast are proud of what they have achieved and quite rightly so – they have created a modern masterpiece. Full of fun, wow moments and humour whilst also sending out an empowering message about being true to yourself.

The whole show is a spectacle! From start to finish it keeps you on your feet through its many plot twists and turns. The choreography by Jennifer Weber is high energy, fun and modern. The cast, particularly the ensemble work tirelessly in the show through this technically hard style of dance, all without seemingly breaking a sweat. The use of the stage is brilliant and every inch is utilised and thought about. Once again, the level of attention to detail is outstanding. This is a very polished original production and one that will no doubt be enjoyed by many for a long time to come.

& Juliet is currently booking until May 2020 at the Shaftesbury Theatre, London. For information and tickets click here.

One thought on “& Juliet – Review”