Pasek and Paul’s hit Broadway show Dear Evan Hansen has recently opened in the London’s West End. Highly anticipated, the show sold out almost instantly and has already extended, booking into May 2020 at the moment. The moving show about isolation, mental health, lies, social anxiety and making connections hits a nerve with audience members of all ages. The Tony and Grammy winning story broke box-office records when it opened at the Music Box Theatre in New York where, 3 years later it continues to sell out daily.

Featuring a young cast of fresh talent, many of whom are making their West End debut in the show, Dear Evan Hansen is led by an incredibly talented group of performers. Sam Tutty is simply wonderful as Evan Hansen. His awkwardness and anxiety coming through from the outset. Whilst at times the nervous hand wringing, leg twitching and awkward movements feel a bit ‘obvious’ Sam acts with conviction and his raw emotion throughout is superb. ‘Words Fail‘ is an absolute highlight and is gut wrenching to watch. Despite being a tough hitting show the writers have managed to also keep it lighthearted with some of funny Sam’s awkward behaviours and the character Jared, Evan’s ‘family’ friend, played brilliantly by Jack Loxton. These add snippets of much needed relief to what could otherwise be a very sombre show. All of the small cast excel and the chemistry onstage is excellent. Lucy Anderson’s torment as Connor’s sister Zoe is visible throughout and ‘Requiem‘ is beautifully performed. Lauren Ward and Rupert Young play the grieving parents excellently. Both showing the different forms of grief so convincingly that it’s easy to get drawn in to the grief of the Murphy family. 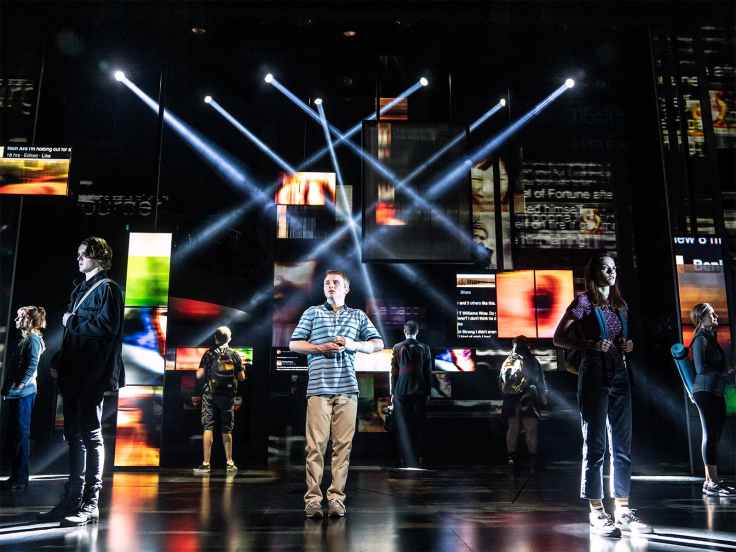 The innovative set design by David Korins works wonderfully with its prominent use of cleverly used digital projections of aspects of social media, Connor’s emails and Evan’s words. All of this is frantically changing on moving screens which provide the perfect backdrop for a show which focuses on the power of social media and the impact it can have on our mental health. Without giving any spoilers away, the final set provides a poignant contrast and is beautiful in itself.

Unsurprisingly, Benj Pasek and Justin Paul have won countless awards for the emotional score including a Tony Award for Best Score and the Drama Desk Award for Outstanding Lyrics and their iconic music is moving with the lyrics being truly thought provoking. The choreography by Danny Mefford continues to replicate the frantic feel of Evan’s mind and encompasses the feeling that time moves on, regardless of what is happening, the situation you are in and how you are feeling. What is very poignant in this production is the use of silence – it is rare to have such long pauses in live theatre and during these it feels as though the audience are literally holding their breath. 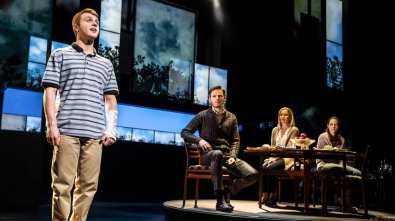 Dear Evan Hansen is not an easy watch. It is hard-hitting and heart wrenching to watch Evan’s story unfold. Yet at same time it is so important. No one should feel alone. In a world where social media is so important and influential it’s easy to see why and how people create new lives and yet can end up isolating themselves even further. Dear Evan Hansen’s message is about accepting who you are and being yourself. ‘No one deserves to disappear’ as we are told through the poignant songs however this is what social media so often does. The characters Alana (played during this performance by Courtney Stapleton) and Jared show us how powerful the world of social media can be and also how easy it is to hide behind the anonymity of it. The use of Connor, played by Doug Colling, appearing as Evan’s conscience is also a clever touch as he battles with telling the truth and losing his new found family. Dear Evan Hansen is definitely a show of our time. The story of longing to have a real connection with others, be it family, friends or even yourself, will resonate with a multigenerational audience. Just be sure to take tissues with you.

Dear Evan Hansen is currently booking until May 2020 at the Noel Coward Theatre, London. For information and tickets click here.