Prince of Egypt has long been a firm favourite DreamWorks film with many since its 1998 debut and it is now set to delight audiences onstage in a dramatic, passionate story starting over 3,000 years ago. The show tells the biblical story of Moses, of differences and the journey to acceptance and features Stephen Schwartz’s amazing score.

The impressive stage in the Dominion is dominated by a large raised map of Egypt on which all the action takes place as it changes from desert to river, Egyptian palaces to pyramid building sites. The production utilises state of the art projections by Jon Driscoll throughout to aid the storytelling and at times these are particularly effective, such as in the Egyptian temples where the hieroglyphics and Pharaoh statues extend out into the audience using cleverly constructed draping. The set, designed by Kevin Depinet, remains relatively simple as it is the ensemble members who bring the story to life. They morph into the river, the sand of the desert and create the backdrop for the events which take place between Moses and Ramses. The simple props, mostly made up of large slabs of stone, are used well but whilst the simplicity does work for some scenes, for others they feel slightly ‘cheap’ in comparison to the other aspects of the show. One of the best parts of the show, the choreography by Sean Cheesman is impressive. Utilising contemporary, lyrical and modern styles it is performed excellently by the dancers. The ensemble are the unsung heroes of the show and work tirelessly throughout. 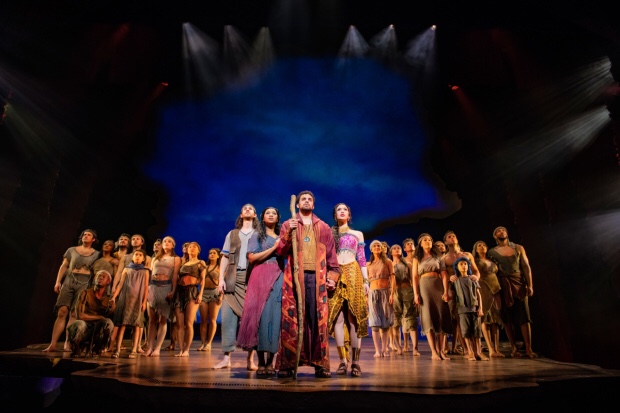 Prince of Egypt has a large company and despite the large size of the stage at times it feels crowded which adds to the hustle and bustle of the busy Egyptian setting. All of the cast are excellent and it should be said that this was a preview performance so given that things were changing daily and the cast were in rehearsals in addition to performing they all performed with energy and passion. Luke Brady has a real talent for storytelling through song and is convincing as Moses. The journey his character goes on is immense and the struggle is captured brilliantly. Brady’s ability to sing both powerfully and from a place of vulnerability is integral to the character of Moses and in the songs such as ‘Footprints On The Sand’ and ‘For The Rest Of My Life’ he has the audience in the palm of his hand. Liam Tamne is excellent as the youthful, confident Remses. Again, as the story develops he also changes and Tamne portrays this conflict between putting himself and Egypt first convincingly. ‘Always On Your Side’ captures this conflict brilliantly. Christine Allado comes into her own during the second act as a source of power and comfort for Moses. Alexia Khadime’s voice is perfect for the moving song ‘When You Believe’ and brings the lyrics to life whilst Adam Pearce’s rich, deep vocals make powerful Hotep the perfect villain. All of the cast are extremely talented and as always it is impossible to mention everyone but Jessica Lee, Silas Wyatt-Barke and Simbi Akande all stand out for their conviction to character.

The score is impressive as you would expect from multi-award winning composer and lyricist Stephen Schwartz who wrote the original music for the 1998 film. The original songs have been heavily altered and remastered to allow for the action to take place on stage, lyrics have been removed, changed and added and fit well alongside the 10 new songs which have been written for the musical. Unfortunately, there is a lack of ensemble songs and a reliance on duets, some of which are over long and lack pace. However, there are some definite hits with ‘One Weak Link’, ‘Through Heaven’s Eyes’ and ‘Heartless’ being particular stand out songs whilst a highlight for many will be the well-known song ‘When You Believe’. The opening number ‘Deliver Us’ is powerful and moving and completely sets the scene for the plight of the Hebrews. Schwartz’s fondness for cleverly written reprisals adds a new dimension to the songs and often they change meaning depending on where it is used in the show and by which character.

Allowing for moments of tension and highlighting moments of love and compassion the lighting by Mike Billings is very effective and helps to tell the story and enable the audience to connect with the characters. The illusions and tricks (Chris Fisher) used throughout the show are cleverly integrated into the plot and are pulled off well. They were particularly impressive for the younger audience members who are sure to be wowed by the hint of magic in the air. For many the test will be the famous parting of the Red Sea and without giving any spoilers the production manages to pull this off convincingly, with audible gasps from audience members once the sea crashes back into its rightful place. It may not be as momentous as some audience members will have been wanting but the simplicity of it allows the audience to focus on the characters and it does not feel gimmicky.

Prince of Egypt is a story of overcoming difficulties and accepting yourself, being true to yourself, your family and your people. At times it lacks pace, especially for a family audience, but it is in the second act where the show comes into its own. Fans of the film are sure to enjoy the new stage production just as much as those new to it. It is a story of hope against the odds and of freedom and is certainly a spectacle to watch. It is a fresh new show with a fantastic cast, passion and heart with an brilliant score by Stephen Schwartz. Make a trip to Egypt your next theatrical experience.

Prince of Egypt is running at the Dominion Theatre, London until the 12th September 2020. For information and tickets click here.