I have literally just got in from the night of my life! I booked tickets to see the Musical Marathon at The Other Palace, London April 16th because it was raising money for charity (£26 for 26 musicals and 26 miles) and I liked some of the line up. I am SO glad I did!

When I walked into the foyer I instantly spotted the Strallen sisters and a few others. Lined up to get my tickets thinking ‘oh wow’ then Christina Modestou walked directly behind me with Emma Kingston. I spotted a few other people I recognized too just milling around. Finally able to go into the auditorium and there were so many familiar faces from musicals. The acts sat on the ends of the aisles with their partners, friends etc and it was a really informal night hosted by Caroline Flack and Paul Taylor-Mills.

Nathan Amzi started with ‘Titanium‘. A really strong and powerful performance, very different to the original and he was really funny too. Louise Dearman (Elphaba and Glinda) sang ‘Don’t You Worry Child‘. Lovely vocals, incredibly clear tone and I loved her variation of the song.

Oliver Saville sang ‘Larger than Life‘. His emotion and acting was so powerful and realistic. I really enjoyed his song and he really engaged the audience. After each performance Caroline or Paul had a chat with the guest and I was shocked that Oliver said that he had auditioned for Book of Mormon earlier that week but it hadn’t gone well because he had a cold (no doubt from Ryan O’Gorman, his flatmate, who has been off with a cold all week). Its hard to believe that he wouldn’t get a role after seeing such an amazing performance. 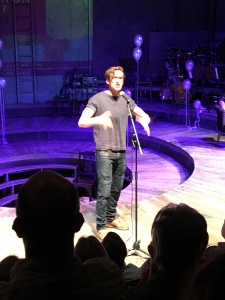 Kim Criswell was just amazing! Her vocal range and ability was insane. She held her top note for what seemed like an age and I loved how she made a mash up of ‘Look to the Rainbow‘ and ‘Over the Rainbow‘. Liam Tamne sang ‘Hurricane’ with such clarity and expression I felt like I was actually at a show rather than a concert.

I’d been waiting for Christina Modestou (slight Rent obsession at the moment) and she performed with her partner ‘Black Magic’ by Little Mix. The rendition was really enjoyable, especially with the acoustic guitar and Christina really put everything into her performance. I liked finding out about the on-stage accident during Rent. The current 2017 Rent Touring cast really do seem to be very unlucky with illness and accidents. 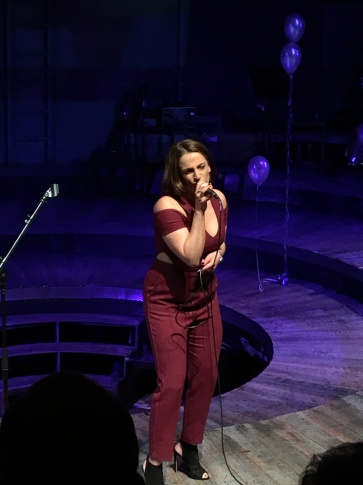 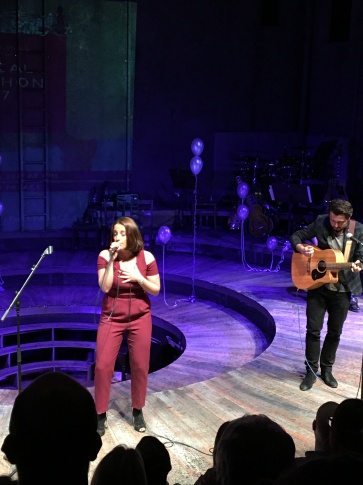 Lockie Chapman had such a deep and powerful voice – amazing to hear. Emma Kingston just blew me away with the power coming from such a small body. Idriss Kargbo just oozed sass when he shimmied onto the stage. His performance of ‘How Far I’ll Go‘ was really emotional and his voice was just fantastic. I can’t get over how talented he is at such a young age. He also hinted that he has a new show coming up after Wicked but wasn’t allowed to say anything other than say the word ‘little’ – cryptic. 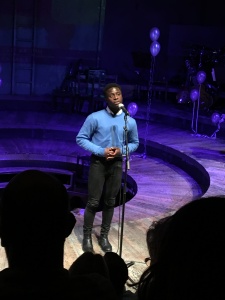 Aimie Atkinson, Genesis Lynea and Stephanie Rojas sang ‘Lady Marmalade‘ and were super. So sassy and flirty and I loved the rap section which had everyone clapping along. 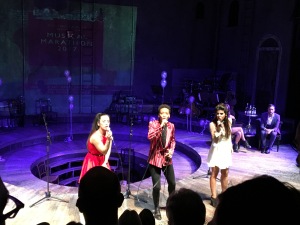 During the interval everyone went back to the foyer and bar where Amber Riley, Liisi LaFontaine and Asmeret Ghebremichael had also turned up! I couldn’t believe how many famous faces there were just milling around. It felt so surreal and I was completely awestruck. It felt like I had won a prize to go backstage not just paid £26 for a ticket! Best £26 ever!

So all was going well until I was behind the 3 Dreamgirls, next to Emma Kingston and Christina Modestou when I dropped my drink! Luckily I don’t think I got anyone with it and I quickly pretended it had nothing to do with me whilst all the time thinking ‘oh my God I almost drowned the Dreamgirls!’.

Second Act saw Zizzi Strallen and Summer Strallen singing ‘Where You lead‘, Aimie Atkinson singing ‘Just Keep Moving the Line‘ and Kim Criswell. I was interested to find out that Aimie had recently been the last Daniella in In the Heights (a lot of the acts seem to have been in that show with Paul at some point) purely because I love Philippa Stefani who also was Daniella in the same production before Mimi in Rent. 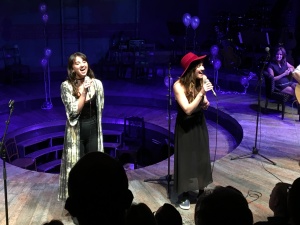 Liam Doyle, who has only just dislocated his collar bone, sang ‘You Will be Found‘. His voice was divine. So rich and textured and his acting was spot on. Apparently last year he met his girlfriend at the same concert run by Paul so he got roped into being the Easter bunny matchmaker for the day. 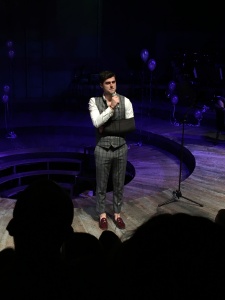 There was a brief interlude where Nathan Amzi (who was slightly drunk by this point) and Zizzi Strallen improvised and sang some well known songs to help make the total of songs to 26 – in line with the amount of miles that Paul will run next week.

Emma Kingston then sang ‘Listen’ which must have been especially hard seeing as the cast of Dreamgirls including Amber Riley, who only a week beforehand had won an Olivier award for her version of Effie White, was in the audience. She was amazing! Totally different to other versions but the power and emotion behind it was full force. Superb singing. I also spotted that Liisi had put a video of Emma singing it on Instagram straight after. 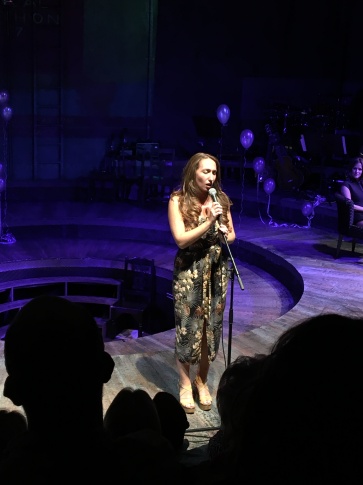 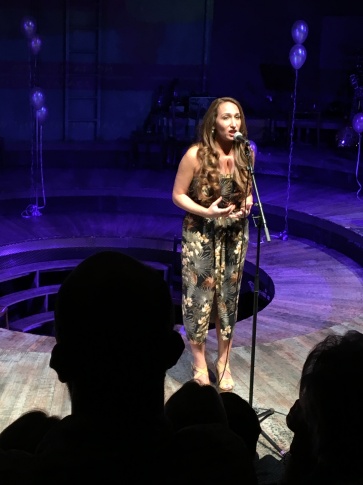 Tyrone Huntley (another recent Olivier winner) sang ‘Home‘ which was performed perfectly. Again he was really good at telling a story through the song and his vocals were top-notch. I loved how he engaged with the audience, not afraid to look anyone in the eye and at the same time stayed in character and sang the song beautifully. 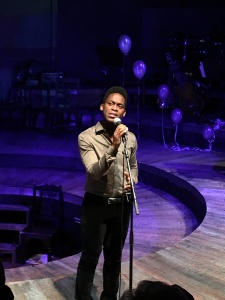 Marisha Wallace finished the evening off with ‘Stay with Me‘. She dedicated it to her Grandmother and it felt like a really good way to end the evening. Another powerful song. These guys have such power (and obviously huge lungs). 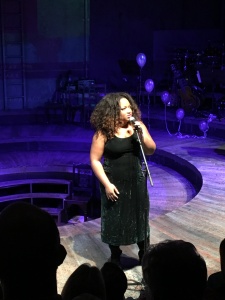 I feel so privileged to have been at this performance. I was surrounded by talented artists, Bruce Guthrie (Director of Rent) was there, a top casting agent Will Burton was sat next to me plus probably loads of people I didn’t even know. The talent was unimaginable and it felt like a really intimate, enjoyable concert where everyone wanted to have fun and raise money for a worthwhile cause. 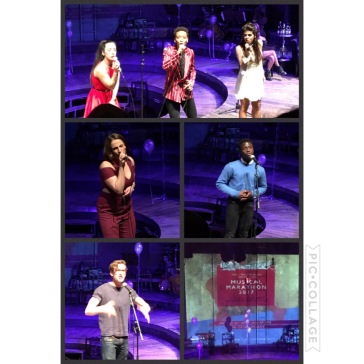 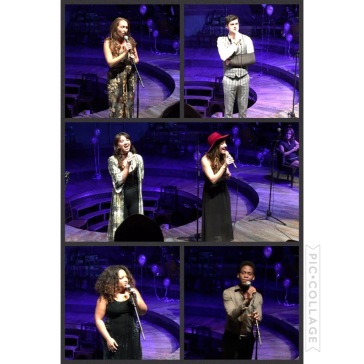 I do love this theatre for its intimacy and cannot wait to find out what other amazing shows they put on in the future years with Paul Taylor-Mills and Andrew Lloyd Webber at the helm.

One thought on “Musical Marathon 2017 – Review”