The Addams Family – The Musical Comedy at New Wimbledon Theatre.

I had been watching rehearsal clips and reading about it since it first started and having heard the US Cast Recording was really excited. It didn’t disappoint.

The set was beautifully constructed and there was clearly a eye of detail. Everything felt ‘right’ and fitted in with the Addams Family as most people know them. I thought the use of the whole stage was really impressive too. They cleverly moved scenery and props quickly and efficiently so no time was left waiting around. 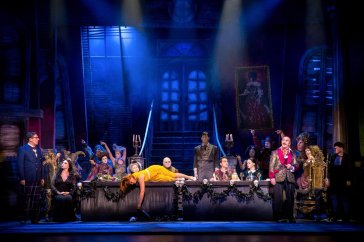 The choreography by Alistair David was interesting and worked well. The stage itself was quite small but all of the ensemble and Addams Family themselves fitted onto the stage and moved around effortlessly. I also loved how the different Ancesters all had clear, distinct personas. This made their presence more meaningful and all of the actors were committed throughout. I especially liked Kathryn Barnes who played Madam Ancester. She fully committed to the role and I found myself watching her when the kooky clan were onstage.

Cameron Blakely was fantastic as Gomez. His comic timing was spot on and considering the role is very dramatic and over the top he actually played the character very realistically. His on stage relationships between himself and Morticia and Wednesday felt very easy and real too. 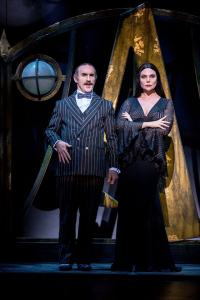 I hadn’t seen Les Dennis in anything since Chicago years ago so wasn’t too sure what to expect. He was amazing! Really knew how to play the audience and again his comic timing was spot on. Complete stage presence whenever he was on stage and completely committed to the role. I don’t entirely understand the Uncle Fester and the Moon story line and it feels a bit like it is just padding out the show but nonetheless it was presented well. 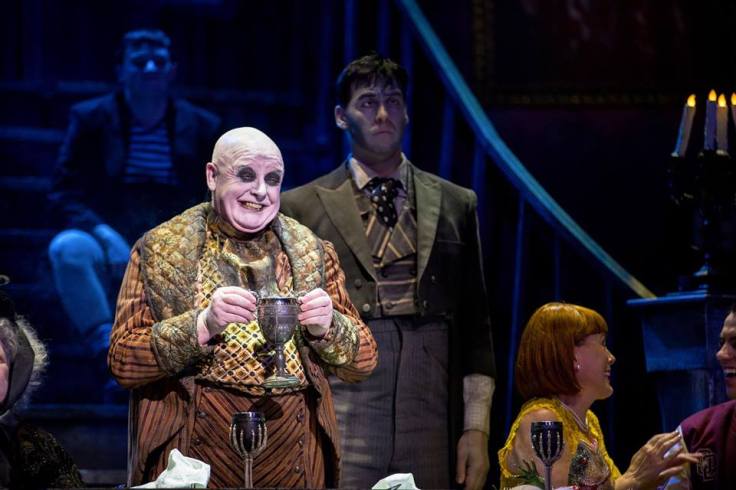 Carrie Hope Fletcher, Wednesday, was really entertaining. Her vocals are pitch perfect and her diction is really good which is important during songs like ‘Pulled’ and ‘Crazier Than You’. I loved her facial expressions and as to be expected she seemed completely at home on the stage. Her on stage partner Oliver Ormson was also very entertaining and during the song ‘Crazier Than You’ I felt he really let himself enjoy the song and his vocals matched Carrie’s. I wasn’t entirely convinced with his accent but I soon got used to it. He also felt a bit over the top sometimes but I think that was the character and not Oliver’s acting. 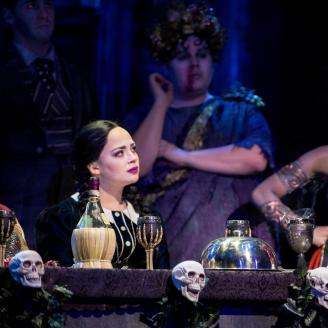 One thing that I did find disappointing (not the child behind me who whined all the way through it) was the amount of songs that were cut from the original Broadway Show. I really enjoyed ‘Where Did We Go Wrong’ and ‘Morticia ‘and these were cut from the show. I also missed ‘Let’s Not Talk About Anything Else But Love’ which I thought was a great song. I did really enjoy the main songs ‘One Normal Night’, ‘Pulled’, ‘Crazier Than You’, ‘When You’re Addams’, ‘Full Disclosure’ and ‘Move Towards the Darkness’. I also enjoyed the new additions of ‘Secrets’, ‘Wednesday’s Growing Up’ and ‘Not Today’. I know that when shows come over from Broadway they are changed, songs are swapped or updated but I still felt some of the songs that were cut could have added to the show. 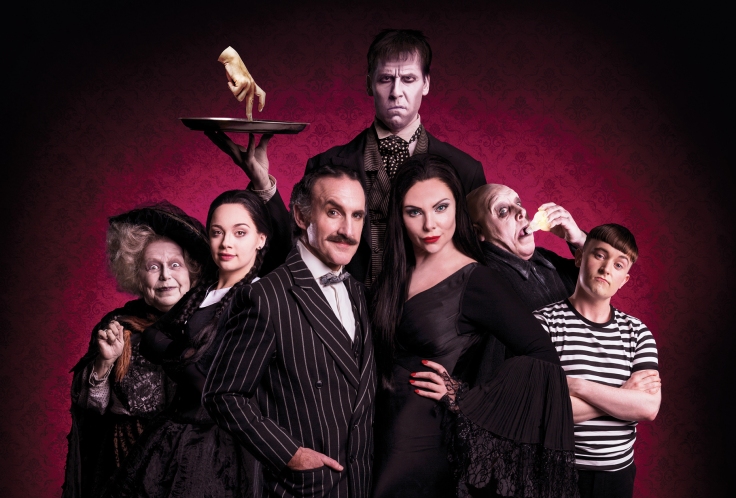 I really enjoyed the show and will be seeing it again in November on closing night. All of the cast were great and it was a really professional tour. I’d definitely recommend to see it for its UK premiere tour.

I saw the closing night of the Addams Family UK tour before most of the cast finish their run in Singapore. It was even better the second time and actually the additional songs and changes seemed to work better. for me though the stand out performance was Scott Paige as Uncle Fester. Les Dennis unfortunately had been unwell for 9 weeks so Scott had taken on the role as Uncle Fester. He brought something really special to the character. Fantastic comedic timing and his vocals were outstanding. His version of Uncle Fester was really memorable and the casting just felt ‘right’.

A fantastic show with a promising future. It has just won the West End Wilma award for Best Touring Show and I can certainly see it doing well in London’s West End in the future. It’s definitely made me want to be one of the Addams Family clan.

The Addams Family is on tour in the UK until November. See https://www.theaddamsfamily.co.uk/tour/ for tickets.