Wicked’s fanbase is huge and cast changes at this show are immense. There were 21 cast members leaving last night and so the audience were on fire! I hadn’t actually seen this cast but was really excited to see Suzie Mathers, Idriss Kargbo and Willemijn Verkaik.

As usual the show was almost sold out and most of the audience were made up of fans who had seen the show previously. The audience reaction to each character (especially the ones leaving) was fantastic and as usual Elphaba said ‘for the last time, I feel Wicked‘ which of course got a huge reaction.

All of the cast were so strong and to have so many leaving on one night made it even more special. There were speeches at the end and every cast member who was leaving was named (except Jessamy Stoddart who was almost missed). Willenmijn and Suzie’s leaving speeches were great and the whole cast deserved the mammoth standing ovation.

I especially wanted to see Jessamy Stoddart, Oliver Saville, Idriss Kargbo and Olivia Kate Holding because I have seen a lot of things about them on Instagram and Twitter so was keen to see them in role. They didn’t disappoint! Rosa O’Reilly was on as Nessa-Rose and she was fantastic in the role!

I stood at the stage door afterwards and whilst some of the cast took a while to come out and were on their way to their after party most of them were more than willing to sign and take photos. I managed to meet most of the ensemble (missed Jessamy and Ollie though which was disappointing) and even got photo’s with Idriss, Willemijn and Suzie. 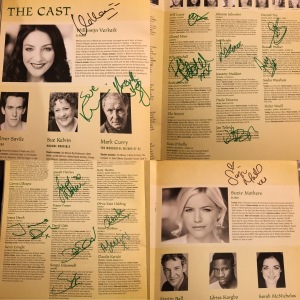 I am sure that whatever their future holds in store this night will be a memorable one and most of that is due to the sheer dedication and commitment from the Wicked fans. The night was great and reminded me why I love cast changes and closing nights so much. The electricity amongst the audience and cast is just amazing and makes it even more special.