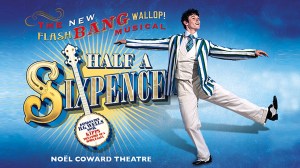 I managed to catch Half a Sixpence before it closed on 2nd September at the Noel Coward Theatre. Unfortunately it was one of Charlie Stemp’s planned days off but I saw Sam O’Rourke who was great in the role.

The use of the revolve stage really worked well to maximize space on the stage and the sets were really top-notch in detail and looked very well made. I especially liked the pub set and the use of the props for the inside of the grand houses worked well to create the illusion. It felt modern but old-style at the same time, not taking anything away from the original but just adding to it instead with some modern elements for example the projections and revolve. Costumes also were very authentic (I loved the colour of the dresses for the music evening scene) and suited the story line and choreography. 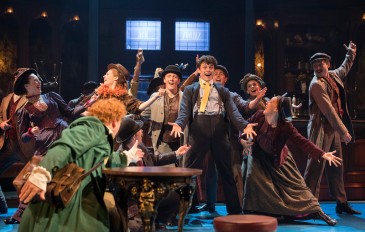 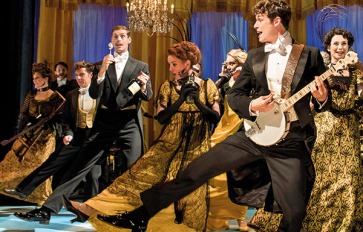 Choreography by Andrew Wright was great and all the cast members were in time and looked like they were enjoying the routines. The energy in all of the routines was fantastic and it was clear that the performers were well trained and rehearsed in the role, even though there were a few understudies and swing members on.

I especially enjoyed performances from Callum Train, Alex Hope and Rebecca Jayne Davis (understudy Ann). The audience were clearly enjoying it and laughing along. It was an uplifting show requiring little brain power on behalf of the viewer but was pure escapism, which sometimes is very much needed. 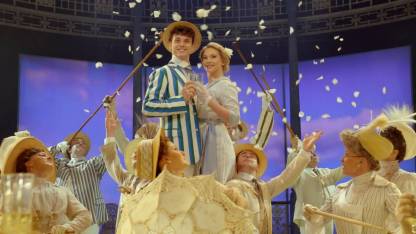 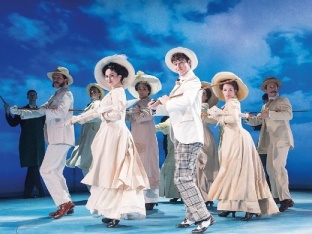 One thing that did bug me was the accents. I come from Kent (very near to Folkstone) and no one here talks like that. I doubt they did in that time period either. The very over-pronounced cockney accent took a while to get on board with and I felt it made some of the songs a bit less clear. This is of course my personal opinion though and I am sure the cast were just doing as directed and their accents were held throughout.

I am glad to have seen this before it closed. I can see why they have opted for more matinee shows to accommodate it’s slightly older/family orientated audience and can also see why it has already been extended twice. I am sure it will continue in some form in the future, possibly as a touring show. Unfortunately it hasn’t converted me to a classic musical theatre fan though. I still very much favor the modern, contemporary musical theatre shows.