With hits from Louis Jordan, this fun musical takes you back in time to the 1940’s and 50’s. The pop-up theatre plays homage to a feel good jazz club. This feel good musical will certainly get your toes tapping, hands clapping and conga-ing to the bar!

The theatre itself is a marvel. Purpose built for this production its foyer and bar feels like you have been transported to an early American jazz club. Singers from the show welcome you in to the bar and sing during the interval. The auditorium itself is spectacular. As well as a main stage at the front, the cast perform in a round style with audience members either side and inside the rotating round stage. Everything has been thought through to make the space as authentic as possible from the bar style tables in the middle to the chairs around the edge. Lighting and the displays around the outside of the auditorium just add to its appeal.

The music is slick, smooth and catchy. Audience participation is high during this show including having members of the audience on stage and a huge conga to the bar during the interval! Throughout the show the audience, of varying ages, relished the interaction between the actors and the audience. This was especially evident during the Push Ka Pi She Pie song where everyone was joining in. 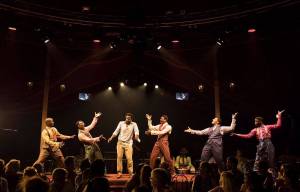 The show centres around Nomax, a lazy alcoholic, who encounters the ‘Five Moes’ who try to teach him some life lessons about life and love. All six cast members were fantastic in role. Edward Baruwa’s characterisation as Nomax was superb throughout the show and his vocals were on top form. His quote of the night being ‘not another song!’ which had the audience in hysterics. Idriss Kargbo, direct from the hit show Wicked, has the voice, dance moves and sass that are perfect for Little Moe. Dex Lee’s dance moves are outstanding and again his vocals are perfect for Know Moe. Emile Ruddock added the comedy factor with Eat Moe. His vocals are also sublime, he has a lovely rich, soulful quality to his voice. Ian Carlyle is hilarious as Four-Eyed Moe and certainly got the audience on board. His command of the stage was especially great. Finally Big Moe, the leader of the Moes, was played by Horace Oliver. He characterisation and ability to tell a story through song was fantastic. Once again, his vocals are top notch and his range from soft to belt is brilliant. 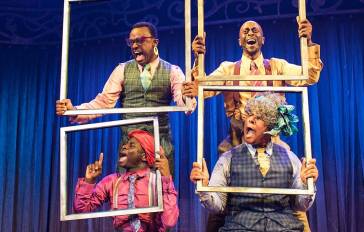 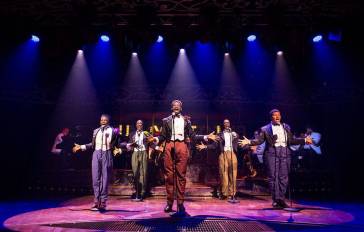 The extremely talented onstage band came into their own during the second act and got the appreciation they deserved. Direction by Clarke Peters and choreography by Andrew Wright was just right for the venue. It was fresh, original and innovative. It showed off the actors abilities and allowed the audience, wherever they were sitting, an excellent view of the action. The use of the rotating round stage really added the extra sparkle to the show. 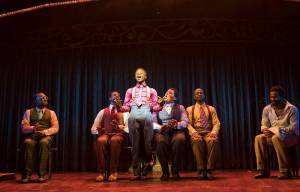 The audience certainly went away smiling and tapping their toes to this new hit. If you enjoy good quality jazz music, great comedy, outstanding dance moves and aren’t afraid to join in with the fun then this is just the show for you. As they say, ‘There ain’t no party like a Five Guys Party’ and you’ll definitely want to join in with the party by the end of the show!