2017 was an outstanding year for theatre. I saw 53 shows in all and along the way found some hits and inevitably some misses. The best thing about theatre is that you just don’t know what you’re going to get. Whilst some shows may sound amazing, they may leave you feeling nothing. Whereas others touch you completely and draw you in. No two people feel the same thing, see the same thing and interpret the same thing. The magic of theatre is that it’s your interpretation. Everyone’s tastes are different and luckily for people living in the UK there is a wide range of theatrical shows offering diverse genres and styles. There is certainly something for everyone and I, for one, am looking forward to searching for it this year.

This musical has taken America, London and the world by storm. With music from Lin-Manuel Miranda it takes a fresh look on the founding fathers of America. Its stunning choreography and direction has had audiences and critics singing its praises almost constantly and I cannot wait to be ‘in the room where it happens’. 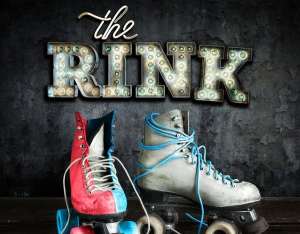 With music by John Kander and Fred Ebb ‘The Rink’ tells a story about Anna, the owner of a roller-skating rink in America who wants to sell up. Angel, her daughter, returns hoping to save the rink and her relationship with her mother. This new production is directed by Adam Lenson and choreographed by the fantastic Fabian Aloise.

This production runs between the 25th May and 2rd June. For more information click here.

Eugenius: The Other Palace. 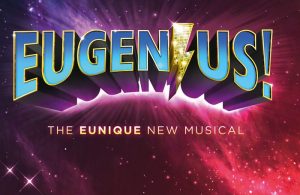 This new musical with original songs by Ben Adams and Chris Wilkins has been eagerly anticipated since a sell-out concert at the London Palladium in 2016. It’s a show where geeks rule, dreams come true and everyone finds their inner superhero. With a great cast and being produced by Warwick Davis this new show looks like great fun.

Bring it On: Southwark Playhouse 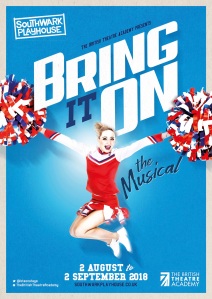 A musical spin off from the popular teen film. This new production unites many of the newest and creative minds including Jeff Whitty (Avenue Q) and Lin-Manuel Miranda (Hamilton) to tell the story of high-school cheerleaders.

This production runs between the 25th May and 2rd June. For more information click here.

With fantastic choreography by Drew McOnie, Strictly Ballroom returns to London after a short stay in Toronto last year. The musical based on the original Australian film which tells the story of ballroom dancer Scott who defies the rules of the competition to follow his heart. It definitely looks like it will dazzle and astound audiences with amazing dancing by a company of over 30 including Will Young, Jonny Labey and Zizi Strallen. In addition the show has tonnes of other all known names in the industry such as Gabriela Garci, Jacob Maynard, Lauren Stroud and Hannah Fairclough.

This production begins on the 29th March. For more information click here.

This production directed by Jonathan O’Boyle and choreographed by William Whelton is transferring direct from the Hope Mill Theatre, Manchester after a successful run. It is the first time in 5 years that audiences have been able to see the soul-searching story of one man’s journey to find himself and purpose in life. With music by Stephen Schwartz this show looks set to stun with its magic, comedy and romance.

This production runs between the 23rd February until 24th March. For more information click here.

Titanic the Musical will open on April 12, 2018 in the Mayflower Theatre in Southampton, the city where the cruise ship set off from in 1912. It opens in the same week as the 106th anniversary of the sinking of the Titanic. The original Broadway production of Titanic The Musical won five Tony Awards including Best Musical, Best Score and Best Book. Having won rave reviews for its most recent production at the Charing Cross Theatre, London in 2016 this show is more than likely to tug at the heart strings.

This production tours the UK until the 4th August 2018. For more information about Titanic The Musical click here. 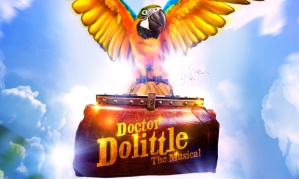 This new production will tour from the 9th November starting in Bromley. It is based on the 1967 film and this tour will be part of it’s 50th Anniversary celebrations. It tells the story of Dr Doolittle, a doctor who learns to speak the languages of different animals and treats them as patients. Featuring puppetry as well as award wining songs such as ‘Talk to the animals’ this new production directed by Christopher Renshaw (We Will Rock You) should be a hit for families.

This brand new British production tells the story of Sylvia Pankhurst, her pivotal role in the campaign for women’s rights and the price of the passion and politics that tore her family apart. Talented choreographer Kate Prince combines dance, hip hop, soul and funk to tell the story of the Suffragette movement. With original music by Josh Cohen and DJ Walde, Sylvia could definitely be a modern way of telling an important part of women’s history to a new generation.

This production runs between the 1st and 22nd September. For more information click here.

Having already been extended until 14th April this new musical is a magical reimagining of the classic novel by Victor Hugo (Les Misérables). It tells the tale of Grinpayne a new act at the circus with a hideous smile. only the love of a sightless girl can reveal his terrible secret. With fantastic puppetry by Gyre & Gimble (War Horse) and a fantastical world it has already had huge success and amazing reviews.

Ending the Regent Park open Air Theatre’s run this year will be Little Shop of Horrors. The hilarious show about a mean, green plant from outer space with a taste for blood. with music by Alan Menken this production will be interesting to see how they adapt the staging to work on an open air stage. Little Shop of Horrors is a cult film and one of the longest running off-Broadway shows of all time. the creative team including the director Tom Scutt and musical supervision by Tom Deering have both worked on the award winning Jesus Christ Superstar at the Open Air Theatre so it should be a roaring success.

This production runs from the 3rd August until the 15th September. For more information click here.

In addition to these fantastic shows there are more new tours and continuing tours on offer including:

New shows and revivals heading to London include:

There is most definitely something out there to take your fancy. What shows are you looking forward to? Do you know of any other new shows yet to be announced? Please get in touch, like and subscribe to my blog for latest news, articles and reviews.