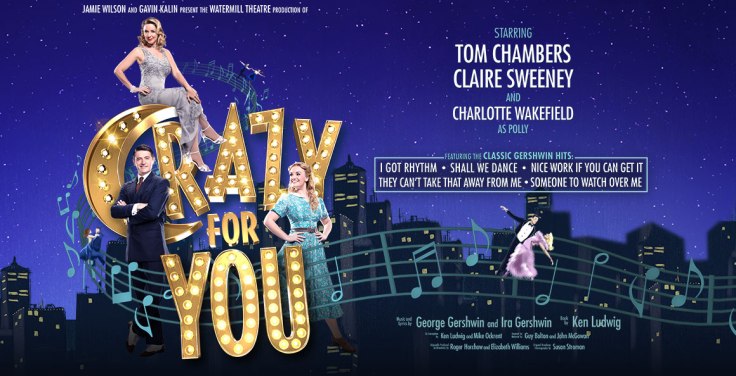 Full of well known hits such as ‘I Got Rhythm’, ‘They Can’t Take That Away From Me’ and ‘Nice Work If You Can Get It’ this romantic comedy musical tells the troubled love story of Bobby and Polly. Sent to close the theatre down, Bobby Child falls for Polly Baker and, in the guise of a Hungarian impresario, decides to save the theatre by putting on a show. The show follows the adventures of Bobby and Polly through mistaken identities, heartbreak and happiness. Winner of many awards including Lawrence Olivier Awards (1993 and 2012) and the Tony Award for Best Musical (Broadway 1992) this show is set to delight with a slick score from the Gershwin Brothers and fresh direction from Paul Hart.

Instantly the audience is taken back to the 1930’s with the clever and detailed set, designed by Diego Pitarch. The set, which depicts a fairly down-trodden theatre, remains the same throughout the show with subtle changes and fresh back drops. It is well made and certainly in keeping with the show. As are the costumes, which again pay homage to the era and are perfect for the characters. 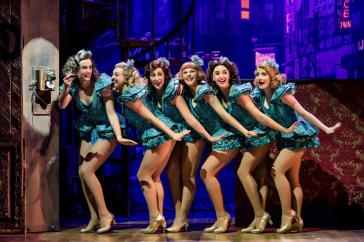 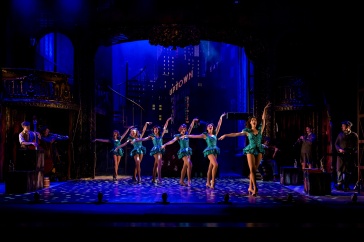 The memorable songs are performed brilliantly by this multi-talented cast. What sets this apart from previous revivals however, is its use of on stage musicians throughout. This is something which is becoming more prevalent in musical theatre. With this show though, it works. As the show is set at a theatre it makes sense that characters would also be musicians and the on stage instruments do not detract at all from the storyline or action on stage. In fact they add another element to the show.

The staging and direction by Paul Hart was clever and showed off each character. Tom Chambers, Bobby Child, certainly maintains character throughout. Whilst his character is slightly over the top, Tom definitely knows how to impress an audience and his physical comedy is great. His dancing and footwork, for which he became famous for in Strictly Come Dancing and Top Hat, is fantastic as are his vocals. Claire Sweeney, who is only just starting her role after replacing Caroline Flack, embodied the role of Irene Roth. Whilst she played the part very similar to her 2015/16 version of Velma Von Tussle in Hairspray, her characterisation certainly fitted the character and she came into her own during ‘Naughty Baby‘. 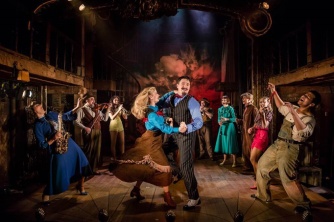 At this performance Seren Sandham-Davies made her debut as understudy for Polly  Baker. You would not have known it. She was perfect in role. Brilliant characterisation, facial expressions and acting whilst also dancing and singing excellently. The relationships onstage between the other characters felt believable and she was able to show a range of emotions as Polly falls in out and out of love during the course of the show. This relative new-comer to the stage is certainly one to watch out for in future roles.

All of the cast are clearly talented and performed all of the songs and choreography with ease. Ned Rudkins-Stow, Christopher Fry and Arthur Boan, in particular, stood out throughout the show.

The choreography, by Nathan M Wright, makes good use of the stage and is in keeping with the 1930’s era. Whilst it is not particularly innovative it is certainly performed well by all of the cast and worked alongside the storyline and score. The use of the musical instruments was also incorporated into some of the choreography which was effective. The transitions between scenes, locations and songs was also well thought through and seamless.

Crazy For You UK Tour Photo Credit : The Other Richard

Crazy For You UK Tour Photo Credit : The Other Richard

This production is certainly well put together. The plot itself may be slightly predicable but it does have some very funny comic moments and one-liners in. The audience definitely enjoyed the show and with memorable songs from the Gershwin Brothers this is sure to be a touring hit. It’s certainly got rhythm, starlight and music so head to your local theatre to check it out!

Crazy For You UK Tour is running until 9th June 2018. For more information, venues and tickets see http://www.crazyforyoutour.com/