Eugenius: The Other Palace

Feel-good, fresh and funny  – this brand new British musical is firmly fixed in the 80’s and makes no apologies for this. Its uptempo and catchy songs, written by Ben Adams and Chris Wilkins, fit the show completely and certainly have the audience chanting ‘Go Eugenius, Go Eugene‘ as they leave the auditorium.

The slightly complicated plot itself focuses on Eugene, a self confessed geek (this is different to a nerd so we are told) whose comic book tales of Tough Man have been chosen to be made into a Hollywood film. Little do they know that Tough Man and his nemesis Evil Lord Hector, played hilariously by Ian Hughes, are real superheroes. Can Eugene reach into his inner-superhero and save the day? 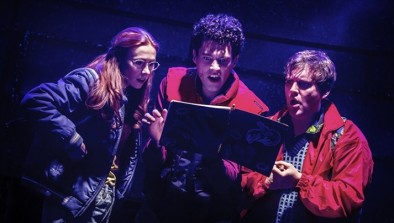 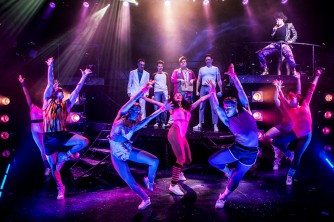 With a simple set designed by Hannah Wolfe and creative lighting by Andrew Ellis the audience are taken back to the 1980’s where comic heroes rule. Teenage Mutant Ninja Turtles are fashionable, the jocks carry round boom boxes and Indiana Jones is a cult icon. The references to the 80’s are literally littered throughout the script and catchy songs especially during ‘Who’s That Guy?‘ in which Dan Buckley excels as the geeky yet loveable Feris, Eugene’s best friend.

The extremely small stage is utilised well throughout the show. Having three levels and multiple entrances and exits makes the space exciting. Whilst there are no props or set pieces this does not detract at all from the production.

Choreography by Aaron Renfree is pacy and performed well by this very talented cast. All of the cast were excellent throughout, with everyone embodying their character fantastically. Liam Forde brought a realistic tone of self-doubt and lack of confidence to the role of Eugene. Watching his journey through the show was great. Proving that everyone has the power to be a superhero as shown in the song ‘Don’t Shoot for the Stars, Shoot Higher‘. Laura Baldwin’s characterisation as Janey was brilliant. She has been perfectly cast as this powerful girl who isn’t afraid to stand up for what she believes in. Her vocals are also beautiful. Touching and soft, yet strong and powerful when needed. The relationship between Liam Forde and Laura Baldwin felt real and their voices were totally in sync during their final ballad ‘Comic Book Kind of Love‘. 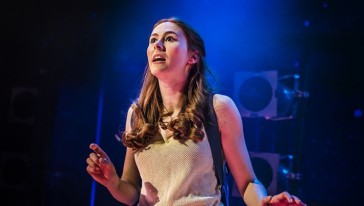 Whilst the story, which is highly inventive, was not always explained clearly and could be a little patchy this show was filled with laugh out loud moments, catchy songs and clever references to the 80’s. It definitely made for an entertaining night out at the theatre and left the audience grinning. There are no other shows like this currently in the West End with its most comparable show being The Toxic Avenger.

This show won’t be for everyone. It doesn’t take itself too seriously and isn’t trying to ‘educate’ the audience. Instead it is there to entertain, make you laugh and enjoy your evening out and it certainly achieves this. Eugenius is a fun, fresh new show so catch it during its limited at The Other Palace whilst you can!

Eugenius runs at The Other Palace until 3rd March. For more information and tickets click here.