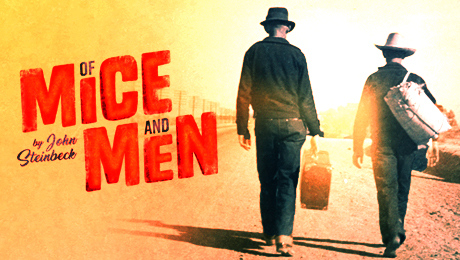 Slick, dramatic and touching. This most recent production of the ever popular ‘Of Mice and Men‘ written by Nobel Prize winner John Steinbeck is truly fantastic. The direction from Guy Unsworth ensures that the audience are truly sucked into George and Lennie’s journey from the moment they step on stage. Every detail has been thought about and it leaves the audience questioning their own feelings and beliefs about the bonds of friendship and what it means to be human.

David Woodhead’s set was superb. Simple and yet hugely effective. Each scene has been thought about in every detail and the transitions between scenes are seamless. The lighting, by Bretta Gerecke, was just phononeminal. The subtle changes in colour and the use of blue and red to emphasise the tension and drama was brilliant. Instead of using spot lights and similar this show had light pouring in through the slatted panels of the barn walls which was an innovative choice and completely worked. The lighting really made this production stand apart from the crowd. In addition, the limited use of music and sound effects also helped to add to the tension of the piece and make events dramatic.

The relationship between George and Lennie, of which this story is based on, was believable, true and honest. George Milton, played by Richard Knightley, was the typical strong character, tough on the outside but he quickly shows his more vulnerable side when caring for Lennie and allowing himself to believe in his fictional dream of living off the land. We quickly understand why Lennie needs George, but why does George need Lennie? This play gives the audience something to think about about human companionship, love and friendship as well as the more hard-hitting topics often associated with Of Mice and Men.

Matthew Wynn’s portrayal of Lennie Small is faultless. It is evident that a lot of research has been undertaken to make sure that Lennie’s disability is realistic and whilst being obvious is not over the top. From the moment he entered the stage he had embodied Lennie. From subtle mannerisms to the quirky way in which Lennie talks, the character was utterly believable and honest throughout. This palpable relationship between the two characters builds for an emotional and dramatic finale which had the audience sitting on the edge of their seats.

The entire cast are brilliant storytellers. All of the cast remained in character throughout and each had their individual quirks adding to the realism of the show. The accent was something which also had been perfected by each cast member. Whilst at times the speed of which the actor spoke mixed with the accent made it the dialogue slightly tricky to follow, it certainly felt completely right with the era and setting of this classic story.

A lot of audience members, young and old, will be familiar with the story written by John Steinbeck in 1937. The book itself has been part of the GCSE English syllabus for many years so countless readers will know the story’s every detail. However, this shouldn’t detract potential audience members. This production has the power of drawing the audience in and taking them on a journey as we follow George and Lennie over the course of several days.

Of Mice and Men is a moving story about trying to hold on to your dreams and friendships during difficult times. The book itself has been the subject of many heated debates which has led to attempts to ban it due to its references to racism, offensive language and euthanasia. Still relevant to todays modern times this production handles these subjects perfectly. They are not over sensationalised or played upon. Instead they are just part of the characters story and lives.

Whether you have read Of Mice and Men before, studied it or have never even heard of it this production will draw you in and take you on a journey for 2 and a half hours. Sit back and enjoy the ride.

Of Mice and Men the UK Tour is playing at the Marlowe Theatre, Canterbury until 3rd February 2018 before it commences with its UK Tour. For tickets at the Marlowe click here. To find out more about the Selladoor production or find out further venues click here.

One thought on “Of Mice and Men: Review”