Following rave reviews and a sell-out season at The Old Vic, Girl From The North Country is in its final week at the Noel Coward Theatre. The show features iconic music from Bob Dylan and a new story from award-winning playwright Conor McPherson. The story focuses on Nick, the owner of local guesthouse in Minnesota, 1934. With his wife slowly losing her mind and a pregnant daughter things are tough for Nick who is also severely in debt. Suddenly things start to spiral out of control when a preacher selling bibles and a boxer come to stay at the guesthouse. 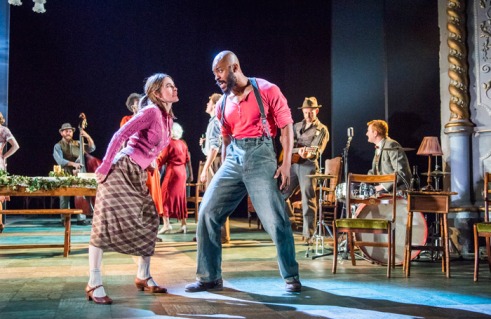 With a very dark plot this production involves lots of different characters and bi-lines, perhaps too many to be developed in any real depth. The iconic hits from Bob Dylan are certainly well orchestrated and performed but did not always seem to fit the story. For an audience made of Bob Dylan fans there would no doubt be rapturous applause for the novel take on the songs, the arrangements and some of the fantastic harmonies created onstage. For musical theatre fans, or newcomers to Bob Dylan, some of the songs didn’t quite fit or flow with the intense storyline. Whilst the overall mood and emotions were always backed up by the songs the actual lyrics and songs themselves felt shoe-horned in.

The onstage band and musicians were fantastic throughout the show and it was great to see the actors playing the instruments too and often breaking the gender barrier. The set, designed by Rae Smith, was simple and the backdrops, especially the printed translucent scenes, were very effective. The props were well used and in keeping with the era and setting and the transitions were smooth.

The cast were all talented but Shirley Henderson was particularly effective. Always in character and willing to take risks on stage. Not only this but she has a very good vocal range, as demonstrated in ‘Like A Rolling Stone‘. She drew the audience in and no matter what was happening on the stage she managed to draw attention to herself.

Ciaran Hinds displayed excellent acting skills as Nick, the guesthouse owner. Struggling with everything going on around him Ciaran managed to show a range of realistic emotions and his use of the stage was excellent.

Sheila Atim, Mariannne Laine, has a lovely, soulful tone to her voice. It was a shame that her vocals were not utilised as much throughout the show. The same can be said for Arinzé Kene who sang with real conviction as Joe Scott. Debbie Kurup is also brilliant in the role of Mrs Neilsen, although her character was not developed enough. Perhaps having less characters and more of one central plot line would have improved this production rather than skirting over several at the same time.

Theatre is a fantastic thing. It can make your heart race, skin tingle and reduce you to tears. It can also have the opposite effect; make you yawn and wish the time away. That’s the beauty of the theatre. It can often be a marmite thing – you love it, or hate it. This show is one of these. There were audience members standing cheering at the end, whilst there were also members who were already heading out of the exits. This production ends on March 24th so if you want to have the chance to make up your own mind hurry up and book a ticket.

Girl From The North Country is playing at the Noel Coward Theatre until 24th March 2018. For more information and tickets click here.

One thought on “Girl from the North Country – Review”