Utterly raw, emotional and powerful. Birdsong is the critically acclaimed stage show based on the famous novel by Sebastian Faulks. The action follows a young Englishman named Stephen Wraysford who embarks on a dangerous, passionate affair with Isabelle Azaire. As the war breaks out Stephen has to lead his men through the Battle of the Somme. During the horror of war Stephen holds onto the memories of Isabelle. This 2018 tour follows successful tours in 2013, 2014 and 2015 where over 200,000 people have been mesmerised by this story of love and courage.

This emotional piece makes for uncomfortable viewing at times and yet is completely compelling. The characters are cleverly developed throughout the show and the shifts in time add a clever dynamic. What raises this production above others is the utter conviction demonstrated by all the cast throughout the tense show. The whole audience were transfixed and could be audibly be heard holding their breath.

This adaptation by Rachel Wagstaff takes Sebastian Faulks’ novel and cleverly makes it into a stunning stage production. It feels as though it has always belonged on stage. Direction by Alastair Whateley and Charlotte Peters is fantastic. Everything has been thought of and handled delicately without shying away from the graphic, horrific nature of the First World War and the Battle of the Somme. This particularly rings true with one of the final lines ‘What were we fighting for?’. Those men who fought for our country would have all thought this many a time during the tough war. Were their sacrifices needed? Did they truly die to save our country? An interesting thought, especially in todays political climate with countries around the world still on the brink of war.

The set, designed by Victoria Spearing, was detailed, well constructed and completely fitting with the show. The main stage backdrop did not change and yet through subtle changes in lighting and simple props the audience is easily transported to different settings and moments in time. The symbolic cross standing proudly in the background is also a lovely touch. Everything associated with this set has clearly been thought of. The lighting, designed by Alex Wardle, is also outstanding. The lighting helps to create atmosphere throughout the show, particularly by making shadows adding to the tense situations the men find themselves in whilst in the dark, dangerous tunnels.

A welcome addition to the show are the acappella songs and music. The sound effects that accompanied the show are brilliant but these simple moments really help to show the soldiers spirit and sound truly like the songs that would have been sung during the Great War. The gentle sounds of birdsong through the show is also a subtle reminder that whilst these men were fighting in terrible conditions, life still went on, life continued and there were moments of beauty mixed with moments of sheer horror. In addition, the moments of silence are especially effective and hard-hitting.

Tim Treloar excels as Jack Firebrace. As a father figure to many of the men Treloar acted with true emotion and is completely committed to the role. His relationship with Simon Lloyd, his comrade Arthur, on stage is excellent. Alfie Browne-Sykes should also be commended for his brilliant portrayal of Michael Tipper, a young soldier who is truly terrified of the horrors of war. A feeling that many young men surely felt. 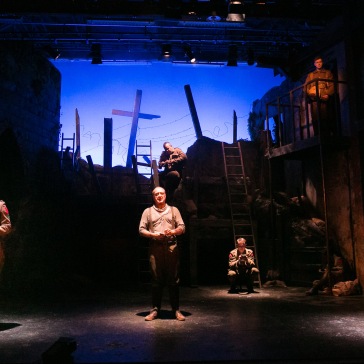 Tom Kay as Stephen starts off being quite monotone and devoid of emotion. This completely changes as the audience learn more about his character and past. Every emotion shown throughout the show feels honest. The relationship between himself and Isabelle, played fantastically by Madeline Knight, is superb. Isabelle is clearly struggling with inner torment and this is shown on stage very well.

This has to be one of the best plays currently in the UK. It is hard hitting, in your face and yet delicate and endearing at the same time. It tells the story of the people, the men who gave their lives. The relationships portrayed onstage are believable and relatable. It will have you transfixed as the pacy plot develops and is one of the rare shows in which you won’t want an interval. Whatever you do, do not miss the chance to see this stunning production! If you see just one play this year then make it Birdsong!

Birdsong plays at the Churchill Theatre, Bromley until 5thMay. For tickets click here.

Birdsong continues to tour the UK until 21stJuly. For information and ticket click here.

One thought on “Birdsong – Review”