Written in 1984 by ABBA songwriters Benny Andersson and Björn Ulvaeus, and Tim Rice this production in London’s Coliseum marks the first time that Chess has been in the West End since 1986. Chess is set against the background of the Cold War in the late 1970s/early 1980s, in which two of the world’s greatest chess masters (one American, one Russian) are in danger of becoming the pawns of their governments as their battle for the world title gets under way. Their lives are thrown into further confusion by a Hungarian refugee, who becomes the centre of their emotional triangle.

This show really brings the 1984 hit into the 21st century. With its interesting and vivid set, designed by Matt Kinley, and the clever use of onstage video cameras (slightly reminiscent of Bat Out of Hell but far superior) this production certainly feels fresh and current. The staging and direction, by Laurence Connor, is brilliant and allows the characters and actors to shine.

Whilst the main characters are all performed brilliantly, it is the ensemble that really impresses in this show. The ensemble is huge and take on various roles throughout the show. Despite this all of the large cast remain in character at all times. The ensemble members are enthusiastic, committed and clearly hugely talented. The intricate harmonies are exquisite and the interesting choreography by Stephen Mear is performed brilliantly. The choreography itself is fresh, modern and certainly in keeping with the show. The different styles of dance used to show the different country’s culture is also clever, albeit slightly stereotypical. 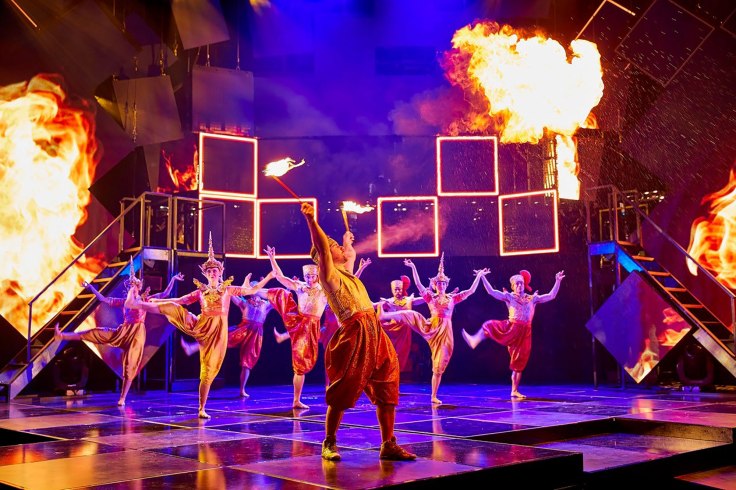 Michael Ball takes on the lead character of Anatoly Sergievsky with gusto. His vocals are powerful and strong and his musical theatre background shines through. As a character, Anatoly is quite stiff and lacks visible emotion until the end of the show. Michael manages to maintain this hard-faced character but still show his human side too. The only slight improvement could be if Anatoly had a Russian accent, just as Freddie Trumper has an American one.

The larger-than-life USA contender Freddie Trumper, played by Tim Howar, adds the rock to this musical. Tim’s vocals are rocky, raspy and perfect for this role. Throughout the show he keeps the audience guessing as to his motives and during the chess competition scenes he steals focus with his menacing looks and intense concentration. His vocals are put to great use during the second act where Tim gets to really show off his power and versatile acting skills.

Cassidy Janson is stunning as Florence Vassy. Her voice is rich, strong and has a jazz/blues quality that really works for this character. Further to this, she is able to act through song amazingly well and her emotions are honest and believable. Alexandra Burke also impresses as Anatoly’s wife, Svetlana Sergievsky. Her, more unusual, voice works well to convey the characters emotions. Her acting and facial expressions are also excellent and the close up cameras allow the audience to truly relate to the characters even from the very back of the large auditorium.

The ENO Orchestra and Chorus, who accompany the show, are absolutely stunning. They truly make this production special. It is fantastic to hear a full orchestra accompanying a show and the effect is breathtaking – particularly throughout the chess tournament scenes where the orchestra helps to build the tension. It is also superb to hear a variety of music, from rock to classical; all of which is played perfectly. 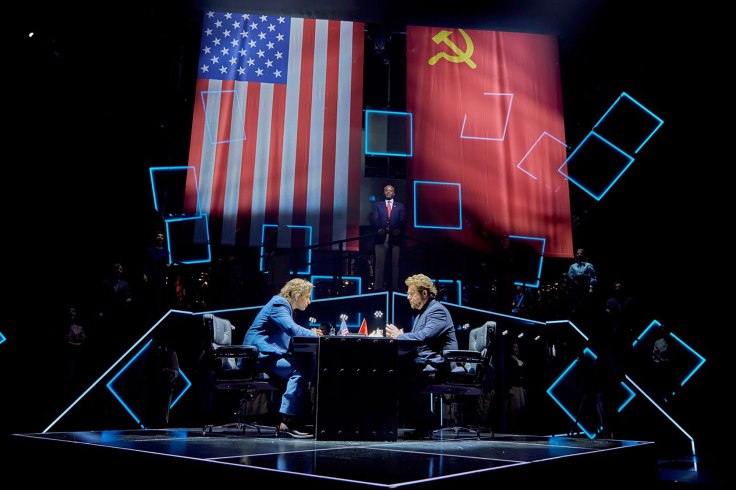 This production has certainly spared no cost. It is slick and exquisitely performed by the highly talented cast. Whilst at points the score can be hard to fully hear and appreciate, the music is a delight to hear and the plot can easily be followed. It’s definitely been a hit in the West End with audiences and hopefully it won’t take another 30 years to make a reappearance!

Chess runs at London Coliseum until the 2nd June. For information and tickets click here.

One thought on “Chess – Review”