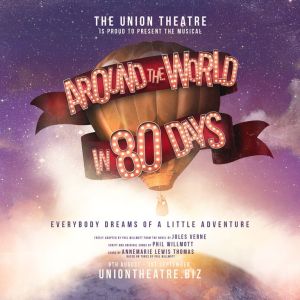 Around The World in 80 Days: Union Theatre, London

Around The World in 80 Days is a musical adaptation of the much loved novel by French Novelist, Jules Verne. This show with script and original songs by Phil Willmott and a score by Annemarie Lewis Thomas, is set to be a fun-filled musical comedy for all the family. The show follows Phileas Fogg and his valet, Passepartout, as they race against time to circumnavigate the world in just 80 days. With his entire fortune at stake, Phileas risks life and limb to win his bet against his enemy, Captain Fix, who will stop at nothing to stop Fogg’s adventure.

Once again this modest venue has been transformed by designers Justin Williams and Jonny Rust. Having seen their work in at least 3 other productions at this venue they have the ability to completely alter the small stage for each show. For this production the set is filled with authentic Victorian style luggage, armchairs, mirrors and subtle, flickering lamps. For the first time that I’ve seen at this venue, the piano and MD are not pushed off to the side and are instead placed proudly in the centre of the stage. 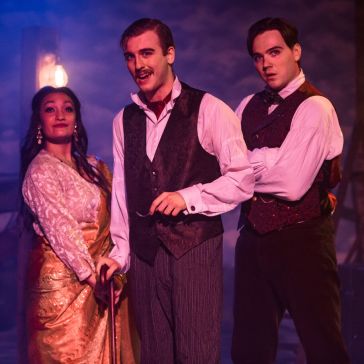 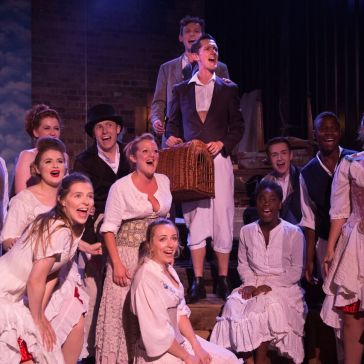 Around The World in 80 Days is entertaining, enjoyable and fun. It has clever comic elements and great characterisation whilst also maintaining a slight Disney edge. It certainly is out to make the audience laugh and achieves this from the very start. Ceris Hine, in particular, stands out for her comic timing and ability to cause the audience to break into laughter. Robert Oliver’s villain, Captain Fix, is hilarious and dastardly in equal measure. Connor Hughes’ performance as Passepartout is endearing and funny. Whilst his accent may be questionable at times, his comic timing and ability to tell a story through his expression is fantastic. The entire cast are committed and energetic throughout the show. 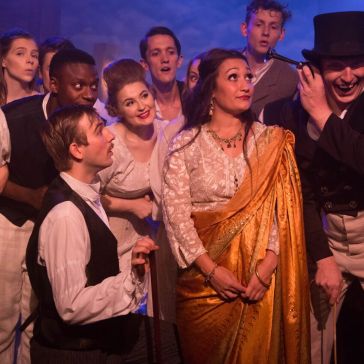 The songs, by Phil Willmott, work well to narrate and add to the story and there is a good variety of styles. Whilst it is a shame that, owing to the size of the venue, the music was not live the cast worked well together and during their ensemble numbers the harmonies stood out. Considering the lack of microphones the sound quality was good and most of the actors could be heard clearly throughout the show. With many cast members taking on several roles they convincingly portray each character in this clever adaptation of the classic novel.

Direction by Brendan Matthew and Luke Byrne has allowed a complicated plot to be told in a humorous way. The clever way that the show handles the tricky travelling scenes, understandably the Union Theatre was not large enough for a real hot air balloon or elephant, is particularly impressive. Choreography by Mitchell Harper makes great use of the space and it’s good to see such variety in a small show. The dances are performed well, especially considering the size of the stage and the large number of ensemble cast. The choreography on the journey to Calcutta is especially interesting and well performed. 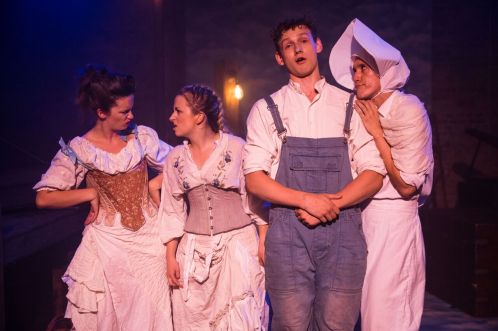 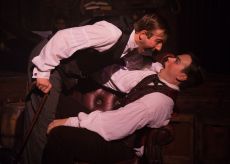 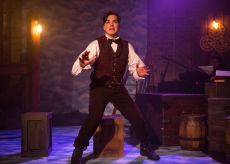 Around The World in 80 Days has just the right amount of humour, music and drama to keep everyone entertained. It is fun and doesn’t take itself too seriously. Perfect for an amusing night out at the theatre.

Around The World in 80 Days runs at the Union Theatre, London until the 1st September. For information and tickets click here.