The musical adaptation of the hit 1990 film starring Demi Moore and Patrick Swayze came to the stage in 2011 and mesmerised audiences with its stylish choreography, impressive illusions and spellbinding score. The 2019 Bill Kenwright touring production of Ghost the Musical kicks off at Bromley before undertaking an UK tour until April 2019. The show focuses on two young lovers, Sam Wheat and Molly Jenson. After Sam’s untimely death during a robbery he is trapped as a ghost. Sam must work alongside phoney psychic, Oda Mae Brown, as he tries to communicate with Molly in the hope of saving and protecting her.

Rebekkah Lowings and Niall Sheehy are tremendous as the lead characters, Molly and Sam. Both are capable of portraying realistic, relatable emotion and their relationship together is brilliant. From the opening number ‘Here Right Now‘ it is clear that both their voices blend together perfectly to create gorgeous harmonies. Rebekkah Lowings particularly comes into her own when Sam is killed. Her rendition of ‘With You‘ sent shivers, and the heart-felt emotion throughout the song is visible. Niall Sheehy is able to show Sam’s anger and frustration superbly, particularly during his powerful lyrics during the finale Act One song ‘Suspend My Disbelief/I Had A Life‘. Carl, played impressively by Sergio Pasquariello, is the ‘baddie’ during the production and Sergio certainly builds to show Carl’s true colours by the end of the show. Carl’s self-destructive streak and evident turmoil is played very well by Sergio and his vocals are a rich contrast to Niall’s. Oda Mae Brown is the much needed the comic relief from such an emotional show and Jacqui Du Bois plays the part with ease. She is funny to watch and her comic timing and delivery of one-liners is fantastic, most notably the bank scene during the latter end of Act Two. Whilst, at points, her vocals do not seem to hold the power and strength needed, she certainly is an audience favourite and understands how to utilise her voice to pull off Oda Mae Brown’s taxing songs.

Fans of the 2011-2012 production of Ghost the Musical will notice a lot of changes to the original score and lyrics by Bruce Joel Rubin, Dave Stewart and Glen Ballard. Whilst quite a bit of the changes do not entirely seem necessary, particularly some of the endings of the songs which now sound quite abrupt and the change to ‘Life Turns On A Dime’ for Carl, one aspect that does work really well is the replacement of ‘Ball of Wax‘ with a much calmer, believable song ‘You Gotta Let Go Now‘. Thankfully, despite the changes, the songs all still deliver the same message and are emotionally charged. By the end of the Act Two finale there are few dry eyes in the auditorium.

The stylised choreography by Alistair David is very reminiscent of the original production and works extremely well. The choreography is very contemporary and is used effectively to show the modern, busy world that the characters are living in. Certain scenes, such as the subway scene during Act One, really utilise the talented cast to create visual effects. Illusionist, Richard Pinner, creates some brilliant ‘tricks’ which, without giving away any spoilers, add to the magic of the show and further engage the audience. 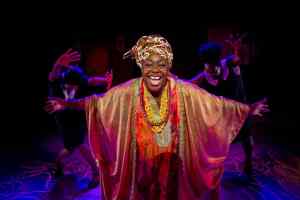 Lighting by Nick Richings works very well to set the scene and the use of purples and blues throughout the show is particularly effective. The clever lighting that allows Sam to appear ‘ghost-like’ is impressive as is the interesting use of lighting to create effects such as the subway, rain and elevators. The lighting in the finale was beautiful, perhaps even surpassing that used in the original production. Sets and costumes designed by Mark Bailey again work well and are in keeping with the production. It is good to see that despite this production being fairly short, time and money has been spent ensuring that the sets are built to a high quality.

Ghost the Musical is a heart-felt show that is designed to tug on your heartstrings and this new UK Tour does just that. Full of emotion and telling a beautiful story this is certainly a show to add to your 2019 wish list. There are a few things that I personally  did not particularly like, especially some of the many changes to the songs, but it is still a fantastic, moving story and the talented cast all perform brilliantly. Only on tour for 4 months this is a strictly limited production and definitely worth taking the time to see, just don’t forget your tissues!

Ghost the Musical is on tour until April 2019. For information and tickets click here.