The new 2019 cast took to the stage tonight, many of whom it is their West End debut. There’s little doubt that soon the name on everybody’s lips will no longer be Jamie New but Layton Williams. The popular star of TV series Bad Education and many musical productions including Hairspray UK tour, Kiss Me Kate at Sheffield Lyceum and the 20th anniversary UK tour of Rent is making his adult West End debut playing the leading role Jamie New and does so with utter conviction. Layton is able to portray the ambitious, confident Jamie with energy and passion. Layton’s fabulous voice adds even more dynamic to the character and his ability to make every single movement into an elaborate extreme is outstanding. But Layton is not just able to portray a young, self assured young boy, he is also able to deal with the hard hitting aspects of the show such as homophobia and rejection brilliantly as showcased in ‘Ugly‘.

Joining the 2019 cast is another newcomer to the stage Sabrina Sandhu as Pritti Pasha. Her awkwardness and shyness, the complete opposite to Jamie works fantastically and her vocals during the moving song ‘Beautiful‘ are a delight. Popular actor and comedian Shane Richie joins as Hugo Battersby and is hilarious as the drag queen guru for Jamie. Taking complete command of the stage as Loco Chanelle he is able to quickly transform into his alter ego. Hayley Tamaddon’s Miss Hedge is also a force to be reckoned with as the strict careers teacher. Continuing as Margaret New is Rebecca McKinnis who is perfect in the role. The emotion she is able to convey during the moving songs ‘He’s My Boy‘ and ‘If I Met Myself Again‘ is outstanding.

This show isn’t just about the lead characters though. Without the superb ensemble the same story could not be told. All of the talented cast are full of energy and clearly committed to the show. Special mention must go to Emily Kenwright and Ryan Hughes for their beautiful contemporary dance during one of the scenes. 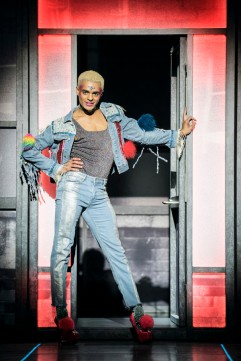 Everybody’s Talking About Jamie is fun, vibrant and moving. It faces stereotypes right in the face and tackles diversity throughout with its wide range of characters from all nationalities and backgrounds. It’s about fighting prejudice and tackling bullies, being able to be who you want to be – the glitter in the grey. It’s a show which will have you laughing out loud one minute and crying the next. This production is certainly one of the most uplifting and fun shows currently on in London’s West End. Definitely head down to the Apollo Theatre to see just why Everybody’s Talking About Jamie!

Everybody’s Talking About Jamie is currently playing at the Apollo Theatre, London until September. For information and tickets click here.