The multi-award winning production of Kander and Ebb’s musical Cabaret is just launching a new UK Tour. Starting at the Churchill Theatre, Bromley Cabaret is set in 1931 in Berlin where the legendary Sally Bowles is about the take to the stage at the infamous Kit Kat Klub. Starring John Partridge (A Chorus Line, Chicago, The View Upstairs) and Kara Lily Hayworth (Cilla, Maggie May) this show aims to wow with its show-stopping choreography and iconic songs including ‘Money Makes the World Go Round’, ‘Maybe This Time’ and, of course, ‘Cabaret’.

Very little, if anything, has changed with the production directed by Rufus Norris. The in-your-face show is almost a direct transfer from its latest outing in London at the Savoy Theatre in 2012 and is just as well put together. The set by Katrina Lindsay works well to transport the audience to the seedy Kabaret club and Fraulein Schneider’s lodgings but it is the lighting by Tim Oliver that truly makes this a spectacle! The vivid bright lights are utilised throughout the production and really add an element of glitz and glam.

The cast are all extremely talented. Energetic and gymnastic; all of the cast work tirelessly throughout the show, particularly the ensemble who ooze sex and sass through Javier De Frutos’ extravagant and complex choreography. John Partridge has full command of the stage as the ‘host’ Emcee. As you’d expect from this experienced actor, he gives his performance everything and instantly gets the audience on his side. Due to the strong German accent unfortunately some of the lyrics are hard to understand, no doubt an issue which will solve itself as the show continues its run. Kara Lily Hayworth wows the audience with her moving rendition of ‘Cabaret‘. Using vibrato to her benefit she manages to be both powerful and yet vulnerable at the same time as the audience finally get to see the true side to Sally Bowles. 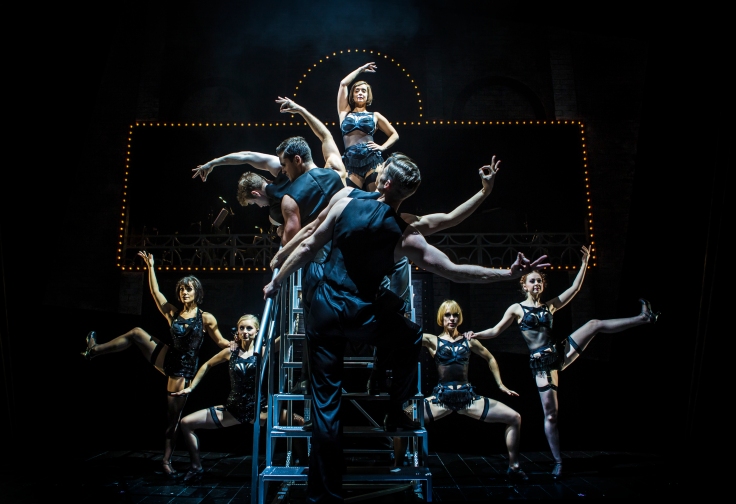 The plot itself is hard-hitting but is at times slightly confusing. Most audience members will know the storyline, having seen previous productions or the 1972 movie – although it must be said that Rufus Norris’ take deviates from the original productions or film. However, at times the plot seems to lose focus and as much as the ‘Kabaret’ scenes lighten the mood and detract from the impending Nazi takeover they are also crude and perhaps even unnecessary. It is almost like watching two shows and at times they conflict each other; Emcee often being the clown figure rather than menacing. Whilst the ending is moving and a true representation of the fascism at the root of the show, the first act does drag slightly. Cabaret is not for me I’m afraid, however this 2019 Tour production is of fantastic quality and has the sparkle of a West End show. Fans of Cabaret will not be disappointed.

Cabaret is playing at the Churchill Theatre, Bromley until the 31st August 2019. For tickets click here. It then embarks on a UK tour until the 23rd November 2019. For information and venues click here.