Big Fish the Musical: The Other Palace, London.

Based on the hit novel by Daniel Wallis and the movie by John August this musical adaptation by John August and Andrew Lippa tells of Edward Bloom’s extraordinary life through his imaginative stories to his son. About to become a dad himself Edward’s son, Will, wants to find out the truth behind the stories and about his father himself.

Kelsey Grammer is the big star catch for this UK premiere of the musical adaptation of the tear-jerking story. He certainly knows how to own the stage and plays Edward Bloom fantastically from his wild storytelling to the tear-jerking ending. His vocals were also good. The songs he performed were clear and his tone was great. Kelsey is obviously a gifted comedian but this production also showed off his serious acting as well. 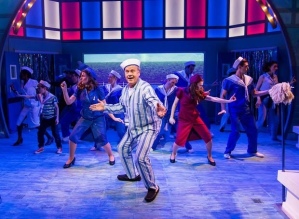 The entire cast were brilliant in role but Matthew Seadon-Young and Jamie Muscato really stood out as Edward’s son Will and younger self. Both actors have fantastic vocals throughout the show. Their commitment to the character was great, Matthew acted especially well during the arguments with his father: thoroughly believable and relatable. Jamie’s lively, enthusiastic retelling of the stories of Edward’s youth was impressive. 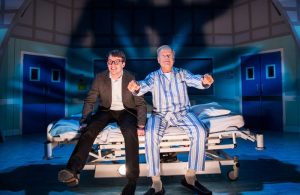 The staging of the show leapt from the bright, vivid stories that Edward tells. Full of interesting events, characters and costumes to the muted colours of a hospital ward. The mixture of events really takes the audience on a rollercoaster and by the end of the show lots of audience members were openly crying as well as laughing. This is certainly a show to take tissues to.

The use of the stage, props and choreography was great, especially given the smaller stage at The Other Palace. This theatre certainly knows how to adapt to enable a variety of shows to play here. The superb projections also helped transport the audience to the exaggerated stories told by Edward.

The relationship between Kelsey Grammer and Clare Burt (Sandra Bloom) was heartfelt and grew as the show entered the second act. Equally Laura Baldwin, who played a young Sandra, had a fantastic relationship with Jamie Muscato. Her voice and facial expressions really impressed, particularly in the scenes at the circus.

Whilst the leaps in time and reality could have been confusing for the audience, the director, Nigel Harman, did a fantastic job of tying the two in seamlessly. Although the show took time to fully get going but once it did the audience was certainly hooked.

For an interesting show, full of surprises then Big Fish is a great production to watch. The characters are great, the songs are fresh and innovative and it truly is a rollercoaster of storytelling. So reel in a ticket before this touching new musical finishes its limited run.

Big Fish is playing at The Other Palace until 31st December. For more information and tickets see https://www.theotherpalace.co.uk/whats-on/big-fish-the-musical.