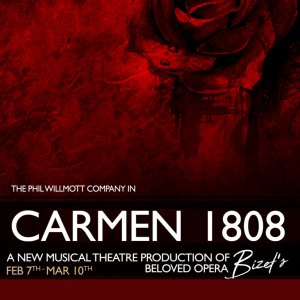 Fresh, pacy and exciting. This new musical adaptation Bizet’s opera ‘Carmen‘ by Phil Willmott is inspired by the fight for the Catalan independence and the true events of the 3rd May 1808. In this production the audience are taken back to 1808 and follow the story of Carmen, a Gypsy freedom-fighter, who is adept at seducing low-ranking enemy soldiers to learn military secrets during Napoleon’s invasion of Spain and relay them to the student resistance. Although, she takes great pride in never falling in love herself this time she has fallen for the young Captain Velarde. As revolution, treachery and violence grip the city they are plunged into a passionate, destructive romance.

This new adaptation claims to be an “easily accessible, invigoratingly fresh look at perhaps the most familiar, beloved and popular operas ever written.” It certainly achieves this. The plot is easy to follow and quickly draws the audience in. It is a perfect introduction to the music of Bizet’s opera, especially for people who may not have seen an opera before, or even be intimidated by the thought.

The book and lyrics by Phil Willmott demonstrate a good variety of musical styles. Whilst it has the classic, recognisable tunes from Bizet’s original opera and there are songs with an operatic feel to them it also features fresh new musical numbers and styles.
The idea of re-writing the plot means that any audience member will be able to follow the story and it is explicitly explained throughout the 90 minute performance. The characters develop as the production builds to its dramatic finale. The only character who could perhaps be explained better is that of the artist, Goya. Having helped to inspire Willmott’s idea for this production Goya is an observer to the action and also acts similarly to a narrator. This element was interesting but not very clear so would have been lost to some audience members who had not studied the programme beforehand.
The lighting and multi-levelled stage, designed by Justin Willians, Jonny Rust and Ben Jacobs, was very powerful. The use of smoke and subtle shifts in the lighting created a very atmospheric auditorium. Choreography by Adam Haigh was certainly in keeping with the era, the dance sections were especially impressive due to the size of the small stage. 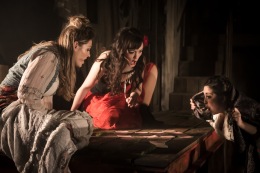 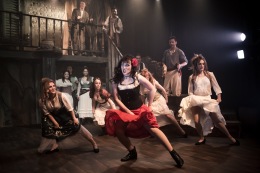 The cast, led fantastically by Rachel Lea-Gray and Maximilian Marston, were thoroughly enthusiastic and dynamic throughout. It was evident that a lot of time has been spent creating each character and the actors are committed to their roles. Thomas Mitchells really impresses with his character of Corporal Luis, adding much needed humour to the show. All of the talented cast had good projection considering no microphones were used, and the dynamics during both the dialogue and the songs was very impressive. Musical director, Teddy Clements, also has to be commended for his fantastic musical accompaniment throughout the show. 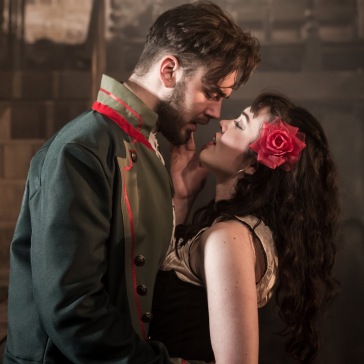 Overall, this exciting production takes a fresh approach to tell the story of a historic event. Whilst using historical events as inspiration is nothing new in the world of musical theatre, take Les Miserables and the hugely popular Miss Saigon for example, what makes this production stand out from the crowd is the use of classical opera music intertwined with a brand new book and lyrics. If it’s a traditional Carmen that you want then this is not the production for you. However, if you want something routed in history but with a fresh approach then check out this production of Carmen 1808 at the Union Theatre during its short run.
Carmen 1808 runs at the Union Theatre, London until the 10th March 2018. For more information and tickets see The Union Theatre’s website by clicking here.
This review was originally written for and published by LondonTheatre1.
Photo Credit: Scott Rylander