Phew, where has February gone? It’s certainly flown by! Oddly, I have seen another 9 shows this month 5 of which have been press night reviews – the same as January.

This month the highlight was actually not a musical but Beats on Pointewhich is a dance show fresh from Australia by Masters of Choreography. I was completely blown away by the fantastic dancing and the fusion of different dance styles. The lighting was also a highlight of the show – making the dance look even more slick if that was possible. The show has now gone back to Australia which is a shame as for the 5 nights it was in London it was sold out and I certainly would have loved to see it again. I’ll be looking out for other creations by Masters of Choreography! 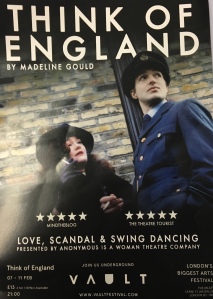 My first visit to the Vault Festival was to see an interesting play called Think of England. Set in WWII this play was really immersive as the audience was taken back to an underground war-time air raid shelter. I love how talented the cast and creatives are that perform at festivals like this. The quick change around between the different shows is so impressive and festivals are such a good way of getting to see a wide range of different genres and styles.

I was also really impressed with THE BAND. I initially took the opportunity to see this on press night at Canterbury’s Marlowe Theatre because I was curious after it has had quite a few negative reviews. However, I actually thought the overall story was good and I certainly enjoyed watching it. Whilst there were definite flaws with the show and I don’t personally feel that it is worthy of the West End I was pleased to have seen the show.

Carmen 1808was another show which blew me away. Attending press night for London Theatre 1 I was interested to see how a musical theatre adaptation of the opera Carmen would work in such a small space. It was well thought out and made for an entertaining 90 minutes. I liked the fact that it was a new show of its own right rather than trying to alter the original Carmen. Utilising the small space effectively the show managed to combine great storytelling, vocals and dance moves to make a really interesting off-West End production. 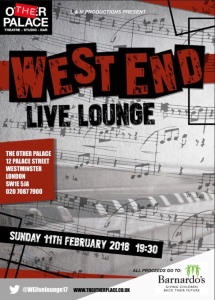 I was lucky enough to receive a last minute ticket for the sold out West End Live Loungewhich was amazing. The talent onstage was just magic. I loved seeing the unique takes on some of the popular songs as each performer put their own touch on the song. Whenever I see these kind of things I am amazed by the talent on show. The show was raising money for Barnardo’s – again so many of these concert style shows are raising money for charities so not only do they provide an amazing night out but they also are helping give back to the community and charity.

Last but not least, I reviewed the opening of the UK Tour of Of Mice and Men. Having studied this novella years ago for my GCSE’s I was interested to find out how it would play out on the stage. I went with a fellow teaching colleague (so probably quite harsh critics) and we were both really impressed with the show. The sets and lighting were especially effective. The actors were fantastic throughout and had the audience sitting on the edge of their seat by the end of the show despite the fact that most of the audience knew what was to come. It was a thoroughly heart-moving production.

I’m already looking forward to March – the month where I will finally be ‘in the room where it happens!’. I have utilised the TodayTix Spring Sale and have booked myself a few treats and have a few press nights to attend too. All in all it’s shaping up to be another very stagey month indeed.

One thought on “February 2018 Roundup”