I Wish My Life Were Like A Musical: Crazy Coqs,Live at Zedel, London.

Ever wanted to know what it’s really like to be in musical theatre? What happens once you’re out of theatre school? The audition process? Becoming the leading actor? The ensemble member? Understudy? Or even the unpaid session singer? Then this hilarious new musical revue, written by Alexander S. Bermange, sets out to show you everything you might want to know about being a musical theatre performer. The good, the bad and the ugly. This show holds nothing back and does so with heart and humour.

Alexander S. Bermange certainly knows how to write humorous, witty lyrics and catchy tunes. From the opening number the audience is quickly drawn in and taken on a ride through auditions, showcases, ensemble boredom, admiring fans and finally getting that leading role. The songs are extremely clever and the avid theatre-goer, or performer themselves, will notice references to lots of major musicals woven neatly into the songs. Whilst some of the songs are a bit stereotypical (the song about all the men in theatre being gay felt out of place and slightly offensive) it is certainly fresh and an entertaining way to spend 80 minutes. Alexander S. Bermange proves he can also perform in two numbers through the show. His comic song about being ‘stuck’ in the ensemble for which, for the most part, he sang deadpan and lacking emotion – was fantastic.

Suzie Mathers got the chance to show off her sky-scraping top soprano notes to great measure in her multiple songs. She certainly knows how to sing and perform to an audience. Her sheer talent and ability was shown throughout the songs, especially one song in which she has to make errors with pitch, rhythm, timing and breathing throughout – much to the audiences pleasure. Technically, this is extremely hard and Suzie pulled it off with ease.

Liam Tamne impresses throughout the show with his comic timing and fantastic range. His song, in particular, about being an understudy is brilliant and is one of the more emotional songs of the night. Liam is especially good at using the full stage. He is a very active, physical performer and this shows during his hilarious song about how the actor ‘prepares’. 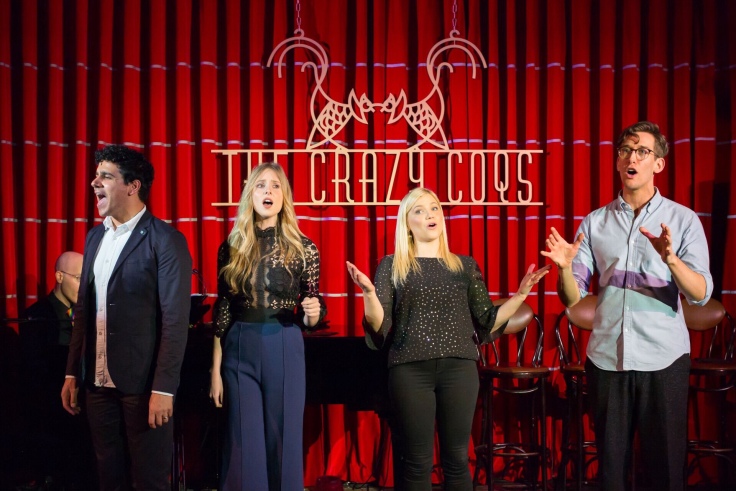 Oliver Saville uses his fantastic deep tones and extensive facial expressions to win the audience over. His ‘apology’ song, especially, was very well written and performed. His voice was noticeable during the group numbers and blended well with the others to create some lovely harmonies. Diana Vickers manages to change from belting to soft, gentle notes with ease. Her storytelling through her numbers is fantastic, particularly during her ‘audition’ song.

The four performers use the space well. Direction by Paul Foster makes good use of the entire room. The venue is very intimate and this show fits in well. It’s almost like the audience are being treated to some behind the scene secrets during this informal revue.

Clever, witty and laugh-out-loud. This unique show is certain to make audiences smile. Whether you are a fan of musical theatre, enjoy comic, well-written songs or perhaps are a musical theatre performer yourself; there is something for everyone. It’s certainly a brilliant way to spend 80 minutes. You may even come away feeling slightly differently about performers onstage and the hard work often taken for granted, however big or small the role. Grab a ticket whilst you can!

This strictly limited run continues on the 15th and 17th April at Live at Zedel in London. For information and tickets click here.