H.R.Haitch is a new British musical about Chelsea, daughter of a pub landlord and a Page 3 model who hates the royal family, who finds out that her boyfriend is a prince. The show is about these two unlikely lovers and the clash of their worlds. Written in 2015, this is the first fully-staged production of H.R.Haitch from Shrapnel Theatre and Iris Theatre.

This production revolves around a central theme of being true to yourself and not changing for others. Tori Allen-Martin takes on the role of Chelsea Taylor brilliantly; ditzy, over the top and loud but instantly likeable. Many audience members will no doubt recognise aspects of other people in her character, perhaps even themselves. Her characterisation throughout the show is brilliant as she shows Chelsea’s journey with Bertie. The emotion displayed during the more sensitive scenes feel honest and real. 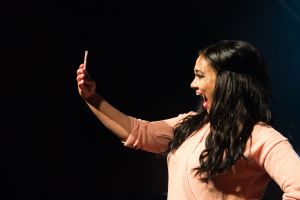 Bertie, played hilariously by Christian James, is a bumbling, enthusiastic but incredibly dim Prince. To begin with his naivety is endearing but soon it becomes quite tiring. However, despite this Christian James performs well and maintains the character throughout. His medley of classic love songs falls a bit flat but vocally he impresses.

All of the small cast are effective in their roles. Particularly Christopher Lyne who is superb as both Brian (Chelsea’s Dad) and Prince Richard the long suffering son of the terrifying Queen who was played by Andrea Miller. Emily Jane Kerr also stands out as the slightly deranged sister, Princess Victoria. Her vocals in particular are really strong and clear. Prince Plockey also plays the vital role of new prime minister Nathan very convincingly.

The songs, by Maz Evans, are well written and work effectively with the book. There is a nice selection and variety of songs on offer in this show. The fantastic piano accompaniment provided alone by Oli George Rew deserves a mention and for a cast without microphones the sound quality is good. Some of the harmonies created are especially effective in such a small intimate space.

The space itself is utilised effectively by set designer Justin Williams. The pub ‘The Dog and Duck‘ takes up the main stage but situated on different levels are the other locations featured in the show. This works really well and all of the set and props look well made and substantial. The small, intimate venue has been completely transformed and the bar stalls and round tables for the audience to sit at at the side are a fantastic touch. 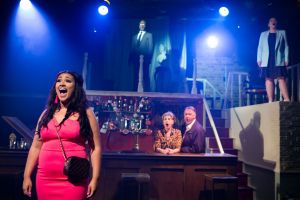 The show itself has promise. It has a strong underlying theme but at times the characters and storyline feel quite pantomime-like. With, at times, the characters being too stereotypical and over the top. The frequent repetition of some jokes also start to fall flat by the end of Act One. The show is centred around the Royal Family, politics, money and the government almost as much as the merger important message of being yourself and not changing for anyone. It is with this plot line though where the most offence could be caused. Whilst the stereotypical portrayal of the Royal Family certainly gets some laughs from the audience, at times it goes too far and ends up feeling rather crude and distasteful. There is a fine line between funny and offensive.

There are certainly elements of this musical which impresses however it tries to hard. Perhaps a more scaled back version with a clearer focus would benefit? Unfortunately, it needs work if it is to attract and entertain a wider audience. However, this is just one opinion. If you’re in London with a spare evening check it out yourself (although maybe not if you are an avid Royalist).

H.R.Haitch continues to play at the Union Theatre, London until the 2nd June. For information and tickets click here.