The Comedy About A Bank Robbery: Marlowe Theatre, Canterbury.

Following on from their smash hit The Play That Goes Wrong this production The Comedy About A Bank Robbery by Mischief Theatre is leaving audiences laughing and reduced to tears around the country on its UK Tour. “A priceless diamond has been entrusted to the city bank, an institution so corrupt that even the security guards are on the take. Can it be safely stored or will it all go horribly wrong?”. 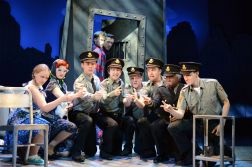 This crowd pleaser certainly knows how to entertain. Bursting with hilarious gags, slapstick humour and clever one-liners it is designed to engage even the most straight-faced audience member. Whilst some of the gags did start to feel slightly old during the second act on the whole the show feels fresh and is pacy. The talented cast, who play various roles throughout the show, are clearly well rehearsed and the jokes flow with ease allowing the performers to bounce off each other. David Coomber is a particular highlight as Neil Cooper, the overly-camp amateur dramatic sidekick and Jon Trenchard is hilarious as hapless Warren Slax. Whilst the story focuses initially on stealing the diamond from the bank there are lots of side plots and they cleverly intertwine building to a final twist at the end of the show. The entire cast work extremely well together as the high energy, pacy production shows.

The 1970’s plywood style set, designed by David Farley, works extremely well to create the different locations including the old, crumbly bank itself and Caprice’s apartment with its misbehaving pull-down bed. The comic-book style lighting, by David Howe, and the set add to the funny nature of this production. One of the highlights of the show is the ingenious staging of the ‘heist’ scenes. Original director Mark Bell and tour director Kirsty Patrick Ward, have cleverly used the set to add to the humour. It is great to see a touring production utilising stunts including harnesses and ropes during a show – often aspects like this are limited due to the nature of touring around the country so it is fantastic to see this element in this particular touring production. 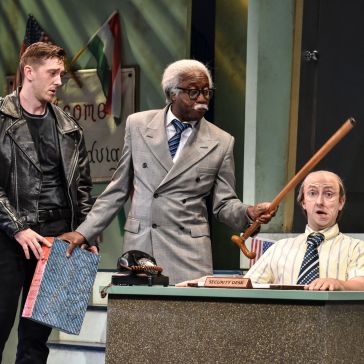 The clever music arrangements by Joey Hickman add to the production. The barbershop style vocals and arrangements of well-known songs help to fill the brief silences during scene transitions but also add another element to the show making it more than just a straight play. Again the cast are brilliant during these sections.

With the over the top characters, hilarious jokes, clever staging and a humorous plot this is certainly great entertainment and definitely makes for a fun night out. The Comedy About A Bank Robbery is certainly another hit for the Mischief Theatre Production and any fans of The Play That Goes Wrong will surely enjoy this too. Check it out during its UK tour – it’d be criminal not to.