Sylvia is a brand new musical celebrating the life of Sylvia Pankhurst and her pivotal role in the campaign for women’s rights and the price she paid for her political purpose.  This musical, co-written by Kate Prince (ZooNation, Everybody’s Talking About Jamie) manages to combine hip-hop, dance, soul and funk to create a modern, fresh take on history 100 years after the first women in Britain got the vote. Co-written with Priya Parmar and with original music by Josh Cohen and DJ Walde this musical sets out to educate people not only about women’s history but Sylvia Pankhurst herself. This style of musical is becoming increasingly popular with similar shows such as Hamilton and Six becoming huge crowd pleasers.

Having had a very rocky start to this production including cast illness, delayed openings, cancelled shows, show stops and extensive editing, this production is now billed as a ‘work in progress’. The performance reviewed also encountered problems with the performance having to be stopped twice due to technical faults. However, despite this Sylvia is stunning! It is so creative, diverse and unique that although it may have had a tough start it certainly deserves to continue and flourish as a full-scale production. It most certainly has a future in the West End.

The score by Josh Cohen and DJ Walde is exquisite. A fantastic blend of styles from  beautiful acapella to rap sections, gorgeous duets and harmonies to powerful soul numbers. There is something for everyone and the incredible cast performed each song with conviction and passion. Particular songs such as ‘No Angels in the House Today‘ and ‘Stand Up‘ are especially memorable. The vocals on display in this particular cast are all excellent and the score allows each member to take the spotlight during the show.

Whilst this is a production about Sylvia Pankhurst, it is much more than that. It touches on more than just justice and votes for women, but also treatment of the working class, homophobia and empowerment. The conscious decision to have a cast made up of performers from different backgrounds and race is fantastic. This brand new British production has taken lots of influences from Lin Manuel Miranda’s hit Hamilton, from the rap, hip-hop style to the modern style of choreography. Whilst it should not be compared to Hamilton, it does have a lot of similarities and no doubt will attract audience members due to this.

The choreography and direction by Kate Prince is very reminiscent of her work with ZooNation. The idea of having a narrator is seen in previous ZooNation productions such as Into The Hoods and Some Like It Hip Hop. This style works well and having the male narrator change halfway through the show to a women further promotes the equality that Sylvia campaigned for. The choreography is pacy, fresh and modern. Although the story is in the early 1900’s, the modern hip-hop style of dance works well and every minute onstage is utilised by the talented cast. Full of strength and power, Sylvia tells the story of women’s justice in a unique way. The production is also full of emotion, building to an absolutely incredible finale to Act One.

Due to cast illness, Maria Omakinwa plays a remarkable Sylvia. With stunning vocals and strength she shows Sylvia to be a truly strong character who only wanted what was best for the women she campaigned for. Witney White’s portrayal of her confident, sassy, trail-blazer sister, Christabel Pankhurst, adds a brilliant contrast. Whilst Beverly Knight’s steadfast, strict character as the sisters mother, Emmeline Pankhurst, is also excellent. The entire cast are clearly passionate about the show and despite the many difficulties that the show has endured every song and move is performed with conviction. Elliotte Williams-N’Dure has the chance to show off her superb vocal power with some lovely solo sections and John Dagleish is fantastic as Keir Hardie. Izuka Hoyle, Verity Blyth and Delroy Atkinson are also a pleasure to watch. Throughout the show the entire cast are used almost all of the time and it is truly hard to know who to watch as the talent is so high – particularly when you also take into account the various issues that the show has had to overcome. 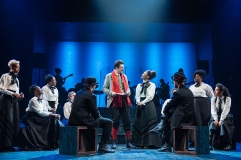 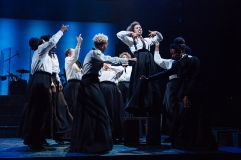 The simple set with large moveable blocks to create scenes is extremely effective and the onstage band help to modernise the show. The costumes, designed by Charles Hanrahan, are in keeping with the time period and the added detail on each of the skirts to make them individual to the character is a lovely touch. The black and white greyscale colouring of the entire production, with the exception of the pillar-red scarf and socks depicting the Labour Party, again shows the oppression of the women at this time and works brilliantly.

There are obviously issues with the show. The producers are well aware of this and are seeing this production of Sylvia as a work in progress with the aim to make a full-scale production in the future. At some points the main story gets lost in amongst all of the other side lines to Sylvia’s life. There are continual technical problems with the band sometimes drowning out the cast and some of the modern references, such as the floss dance move and Eminem quotes don’t sit well with the overall production. An area which definitely needs work is the ending. The current ending does not have the same energy and passion as the rest of the show and feels very weak. It will certainly benefit from having more time and work spent on it. However, despite all of this Sylvia is a unique show. It is full of promise, creativity and passion. Sylvia has the power to become the British equivalent to Hamilton. Just like Elliotte Williams-N’Dure sings, this show is ‘not typical, not stereotypical but individual’. Going by the audience’s reception to it during its month at the Old Vic it will certainly be a crowd pleaser. Sylvia isn’t quite ready yet, but with just a little re-writing and staging it is destined to become a huge hit!

Sylvia is playing at The Old Vic, London until the 22nd September. For information and tickets click here.

This review was originally written and published by LondonTheatre1.