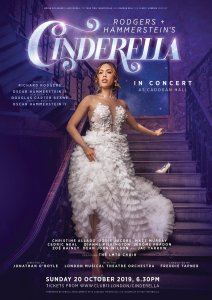 Rodgers and Hammerstein’s Cinderella is the Tony Award-winning musical that has delighted American audiences with its contemporary take on the classic fairy tale. This semi-staged concert, directed by Jonathon O’Boyle, marks its UK Premiere. It features songs such as ‘In My Own Little Corner’, ‘Impossible/It’s Possible’ and ‘Ten Minutes Ago’, alongside a hilarious and romantic new book by Tony Award-nominee Douglas Carter Beane, as well as some new characters and surprising twists. With a host of star names including Christine Allado, Dianne Pilkington, Jac Yarrow, Jodie Jacobs and many more, accompanied by the 21-piece London Musical Theatre Orchestra directed by Freddie Tapner Cinderella was magical.

This is a modern version of Cinderella and yet the complicated score felt very classical in its approach. Despite the difference in styles it worked perfectly. This version is about more than just winning a hand in marriage but also about helping others, overcoming diversity, friendship and most of all kindness. Christine Allado makes a wonderful Cinderella, or Ella as she is known. Her classical training is put to good use throughout and she managed to hit each soaring note with ease. Jac Yarrow brought more to the character of Prince Topher than just a Prince looking for a wife. His rich vocals worked well with Christine‘s and his playful youth made his Prince likeable and relatable. However it was Mazz Murray and Jodie Jacobs who stole the show as Charlotte and Madame (otherwise known as the ugly step-sister and step-mother). Vocally Jodie blew the roof off of Cadogan Hall but it was their comic timing that really made them stand out. Having the audience in stitches at almost every moment comedy comes easily to the pair and they truly embodied their characters in every second on stage.

Cinderella was a semi-staged concert performance and whilst the cast did have scripts they were not used very much. Clearly each performer had taken the time to study and become their character and this shone through. It was an interesting choice to have the actors keep their own accents. This may have been down to the limited rehearsal time but personally I think it would have been better to have a universal accent however this is only a minor criticism of an otherwise fabulous performance. The incredible projections by George Reeve were glorious and further helped to tell the tale and weave the fairy tales magic.

This performance however would have not have been able to go ahead without the stunning London Musical Theatre Orchestra. The 21-piece orchestra was the highlight of the evening. Managing to make Rodgers and Hammerstein’s complex score come to life under the direction of Freddie Tapner. Cadogan Hall, a purpose built concert hall, was just the right setting for this magical performance and the orchestra managed to fill the large auditorium with ease.

Despite the limited rehearsal period and a few technical sound issues this UK premiere of Rodgers and Hammerstein’s Cinderella was glorious. It was brilliant to see classical musical theatre with a modern twist and the cast and musicians managed to cast a spell over everyone. The audience certainly left forgetting the impossible and realising that truly anything is possible.