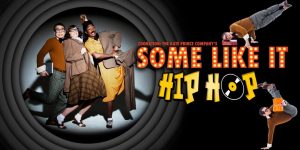 ZooNation’s Some Like It Hip Hop is back and it means business. The hit 2011 show mixing contemporary hip-hop dancing with storytelling and an original score is taking no prisoners as it lands in London completing its UK Tour. Telling the comical tale of love, mistaken identity and revolution Some Like It Hip Hop is much more than your usual dance show. This is storytelling as its greatest.

Choreography by Kate Prince, Tommy Franzen & Carrie-Anne Ingrouille is sharp, slick and so expertly performed by the insanely talented cast that it’s easy to overlook the incredible complexity of it. Mixing a range of different hip-hop styles including locking and popping, breakdancing and funk there is never a dull moment. The ensemble work is fantastic and it’s great to see the cast each having their own time to shine through the intricate choreography. Fast and furious at moments whilst delicate and emotional at others this is much more than a dance show.

The original score written by Josh Cohen and DJ Walde is catchy and memorable. Each song is uniquely written to provoke different emotions and aid the storytelling and the lyrics, by Kate Prince, are extremely clever. It’s hard not to sing along to the finale song and fans of the shows previous productions will be happy to know that the show retains all of its songs with limited changes. It’s a joy to hear Elliotte Williams-N’Dure onstage again with her soulful rich sound, accompanied beautifully by Anelisa Lamola and Sheree DuBois. Dwayne Nosworthy is the perfect narrator with his great command of the audience and quick-witted humour.

The story, written by Kate Prince and Felix Harrison, is influenced by themes from the classic movie Some Like It Hot, the hit US TV series Mad Men, and Shakespeare’s Twelfth Night. A lot of the themes are relevant to todays society and the overarching storyline behind the characters and the way they behave, especially The Governor, is heartbreaking. Returning to the production Lizzie Gough is splendid as JoJo and Jade Hackett is hilarious as Kerri. Michael Naylor’s Chadwell is menacing whilst Andry Oporia’s Governor is spellbinding. But is is Natasha Godden who stands out the most with her powerful, passionate performance as Oprah. Her emotional connection with the character makes it hard for the audience not to be captivated by her performance. Some Like It Hip Hop is truly an ensemble show and the entire cast are superb.

Some Like It Hip Hop runs until the 9th November at the Peacock Theatre in London. For information and tickets click here.