After taking Edinburgh Fringe 2017 by storm the musical by Toby Marlow and Lucy Moss hit London’s Arts Theatre in December and sold out straight away. Now sporting five fresh new Queens (including the incredibly talented and versatile Grace Mouat who understudies for all of the six Queens), stunning costumes and an epic set, Six is back at the Arts Theatre until the 14th October 2018. Direct from the Edinburgh Fringe 2018 where it was sold out for most of its run and was quite literally the buzz word on everyone’s lips, this is one show you cannot afford to miss. Telling the story of the six ex-wives of Henry VIII for the first time in a mixture of contemporary, rap, hip-hop styles Six puts a completely new twist on ‘his-story’. With an outrageously catchy score and heap loads of sass, these Queens definitely know how to put on a show! 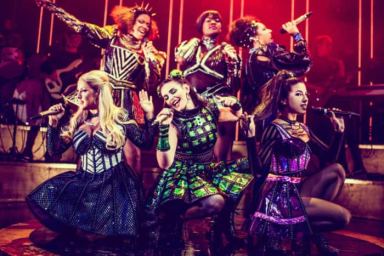 Wow! It was hard to beat the original show with its stand out, catchy lyrics and witty one liners but somehow the creatives and the new cast of Six have managed to do just that! The innovative, modern choreography, by Carrie-Anne Ingrouille, mixed with the vivid, eye catching lighting, by Tim Deiling, has added a totally new dynamic to this show transforming it into a force to be reckoned with. Six stands out from all the other shows currently in the West End. With its new style of concert-come-musical it is sassy, sexy and spectacular. This joyous musical has the power to make the entire audience clap, cheer and whoop along from the opening beat and make them leave singing the catchy songs on an endless cycle of repeat.

The highly talented on-stage all female band are superb and it’s great to see them taking a centre stage alongside the ‘ex-wives’. With a female MD, rare in the West End, this show is all about empowering women! The new cast are absolute superstars in the making! Each Queen owns the stage and commands attention from the audience. The cast are outstanding at telling ‘her-story’, it is the ultimate pop-concert with a Tudor twist. Jarneia Richard-Noel opens the show to raptuous applause and quite rightly so, her vocals are immense! Millie O’Connell is just hilarious as the unapologetic Anne Boleyn. Natalie Paris has the ability to switch the show up and for her emotional song the audience is left blinking back tears. Alexia McIntosh’s ‘House of Holbein‘ is fantastic and the new staging for this song, in particular, works wonders. Aimie Atkinson is every bit the diva as Catherine Howard, but again the clever staging adds another element to her story, one of which Aimie performs brilliantly. Maiya Quansah-Breed’s vocals are to die for, subtle and soulful she adds an extra element to the six Queens. Trust me if Henry VIII were around to see this show I’m sure none of them would be ex-wives!

What this show does so cleverly is mix British history with modern pop music, insanely catchy lyrics and amazing performances. It is not the British equivalent of Hamilton – it’s in a league of its own. A concert to rival all concerts and it’d be ridiculous to miss out on seeing this astounding piece of theatre.

Six runs at the Arts Theatre, London until the 14th October 2018 before embarking on a UK Tour. For information and tickets click here.