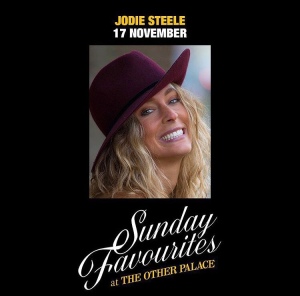 Sunday Favourites at The Other Palace: Jodie Steele

Jodie Steele proved that she is a force to be reckoned with at The Other Palace’s latest Sunday Favourites concert. Jodie has had a long and varied career so far ranging from Rent to Wicked, Bare to Heathers and is currently playing Katherine Howard in the UK Tour of hit show Six. Taking the audience on a trip down memory lane, Jodie managed to condense her busy career into a few hours and did so superbly!

Jodie’s energy and charisma is infectious to watch and her voice is so powerful and raw. Each song was sung brilliantly and full of character. During the two hour long concert Jodie invited several guests up to song with her from shows she had worked on in the past including Myth, Rock of Ages and Wicked. The Wicked mash-up with Kayleigh McKnight was utterly spectacular! A completely new arrangement, by Kris Rawlinson, brought a new life to the songs and allowed both singers to show off their power, strength and skill – with some amazing harmonies and riffs thrown in for good measure. At the end of the immense performance Jodie said she would love to record the song – let’s all hope she does as the world needs to hear this beauty of a mash-up.

Having been involved in musical theatre for so long now Jodie was able to reminisce about the jobs and shows she has been in, the amount of times she has broken her nose and the numerous auditions she has had – broken foot and all. As always, Jodie talks in such a fun, lighthearted way that the audience feels like she is talking just to them. Jodie is not afraid to laugh at herself and doesn’t take herself too seriously – a quality makes her truly special.

During the show the audience were treated to songs such as ‘In His Eyes’ (Jekyll and Hyde), ‘Out Tonight’ (Wicked), ‘Candy Shop‘ (Heathers), ‘Legally Blonde/So Much Better‘ (Legally Blonde) and ‘Heaven on Their Mind‘ (Jesus Christ Superstar). With each song Jodie added something unique to her rendition and certainly did not play it ‘safe’ – belting out those power notes and adding delicate riffs and twirls to each song.

Jodie Steele is currently on tour with Six the Musical where she plays Katherine Howard. Make sure to check her out at a venue near you. If this concert is anything to go by we will be seeing and hearing this vocal powerhouse for a long time yet!

To find out about the UK Tour of Six click here.

For a review of Jodie Steele and Joel Harper-Jackson’s concert at The Other Palace in 2018 click here.